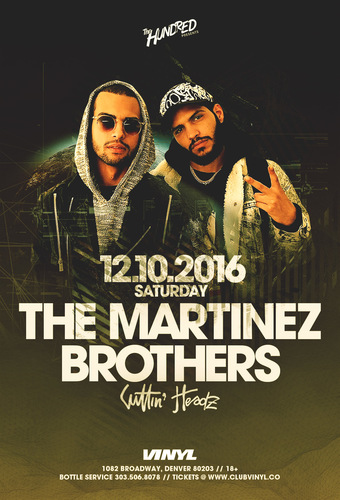 The Martinez Brothers, two young men from the Bronx, raised on their father’s love of the Paradise Garage and road-tested worldwide before they even left high school, are emerging as leaders in the global house music scene. The guys have held a residency at DC-10 in Ibiza since 2011, and in 2014 their standing within the world of underground house and techno is solid and constantly rising – their DJ sets are full of energy, fuelled by the brothers’ in-depth knowledge and an innate ability to guide the crowd.

The Martinez Brothers have produced a number of dance floor-ready releases since their earliest days at Objektivity, releasing their first EP, “My Rendition” in 2006 under the guidance of Dennis Ferrer. Other highlights include one of 2013′s big underground Ibiza hits, Santos Resiak’s “A Better Light” (The Martinez Brothers Remix) on One Records. Their ubiquitously popular remix of Green Velvet’s “Bigger Than Prince” (Circus) was named the most-played dance track at ADE 2013, further showing their range as producers and delivering a dark, raw groove with cut-up vocal accents. In late 2013 / early 2014 they released the two-part hip-hop mixtape “Warhol/Basquiat,” which Philip Sherburne named SPIN Magazine’s Dance Track of the Week, saying: “At their best, their beats have a quizzical, psychedelic feel, stretching loops of Donna Summer and George Duke into long strips of taffy and turning up the humidity until they dissolve on their own.” This year they’ve teamed up with DJ Gregory / Point G with “What’s the Point?” the first release on his new label, Ever Lasting LovE.

2013 marked the beginning of their homespun event series Mad Beats & Crazy Styles, offering the brothers a space to explore their New York dance music roots. They have also conceived a new record label, Cuttin’ Headz, which will be a home to their musical experimentations. Also this year comes the premier of Tuskegee, the brainchild of The Martinez Brothers and Seth Troxler. Using the black and Latino musical experience in the US in the early 90s as inspiration, TMB and Troxler will be putting out a series of vinyl-only releases as well as a clothing line.

Earlier this year, The Martinez Brothers broke into the world of high fashion by traveling to Paris to provide music for Riccardo Tisci’s Givenchy Menswear and Womenswear Fall / Winter 2014 /15 collections. The track “Flawless” has already been featured in a Style.com exclusive preview of the Nike RT Air Force 1 Collection, offering a first glimpse of Riccardo Tisci’s collaboration with Nike.

This year alone the guys have been all over Europe and the Americas, they’ve premiered in Australia, and have plans for a tour of Asia. While on the road they created a behind-the-scenes Coachella photo diary for Rolling Stone and Nylon Guys. Production-wise, they’ve laid down some studio tracks with the legendary Nile Rodgers and have collaborated with Spanish Harlem-born hip hop star Bodega Bamz on his forthcoming mixtape. Despite the whirlwind of activity, Chris and Steve remain positive, down-to-earth guys. When asked about their achievements, they always humbly reply, “We are so blessed!”