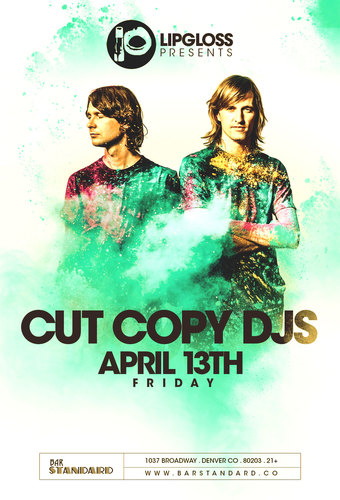 Cut Copy is the musical lovechild of Melbourne human giraffe and 70’s MOR fetishist Dan Whitford. A project born in the early 21st century, Cut Copy was originally more of a solo project for Dan to exercise his love of sampling and instrumental hip hop, before he took a turn for the dancefloor and released the I Thought Of Numbers EP in 2001. Following it’s release and a live mishap that saw his sampler fried, Dan recruited a posse of friends for the recording of his sparkling debut album, Bright Like Neon Love. Enter Tim Hoey [guitar/bass/keys], Sonic Youth groupie and all round renassaince man with a penchant for mainlining espresso shots; Mitchell Scott [drums] avid bird watcher, owner of the largest collection of rare African stick insects in the world; and Bennett Foddy, [bass/keys] library dweller, the sensible one. These gents joined Dan in the recording process to form like Voltron and make the Cut Copy sound what it is today – scuzzy disco, post-post-punk, electric lovers rock, sweet space pop. A sound that references 70’s rock staples like ELO and Fleetwood Mac, late 80’s/early 90’s indie like Sonic Youth and Guided By Voices, the disco production of Nile Rodgers and Bernard Edwards, post-punk and French house.Since Bright Like Neon Love’s release in Australia, Cut Copy have gone on to sell out shows nationally, play the festival circuit, appear on the Kitsune Midnight compilation, complete a bunch of remixes, find God, lose him again, break hearts and win them back, release Future and Saturdays as singles, and win a massive amount of love along the way. Bennett took a leave of absence and has been buried in the books studying for a Phd, and the outfit was streamlined down to a 3-piece mid-2004. March this year saw them play their first shows overseas, with appearances in the UK, New York, Texas for SXSW, LA and Miami. So successful was the jaunt they were invited to support Mylo on his 12 date UK tour, and have scheduled more shows and trips for the remainder of 2005 to capitilise on the albums UK and US release.The music of Cut Copy is like rediscovering lost memories and hearing the sound of the future both at the same time, and making you want to grow a discoball for a head and electric guitars for arms. Let it light up your life, Bright Like Neon Love...