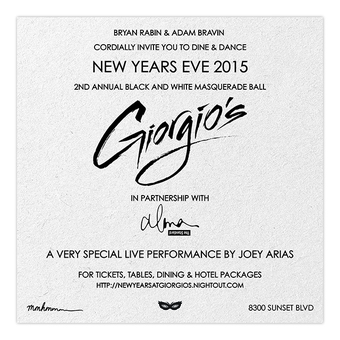 BRYAN RABIN AND ADAM BRAVIN Present the 2nd Annual New Year’s Eve Black & White Masquerade Ball at the Legendary GIORGIO’s with a Performance by JOEY ARIAS In Partnership with ALMA at The Standard, Hollywood

General Terms
All guests must be 21+ with valid photo ID. All sales are FINAL. Tickets & tables are NON-REFUNDABLE.

Producer Bryan Rabin and DJ Adam Bravin are ringing in 2016 with a special New Year’s Eve edition of Giorgio’s, A Modern Discotheque on Thursday December 31, 2015 at mmhmmm at The Standard, Hollywood. Giorgio’s, named after the legendary Oscar and Grammy award winning producer Giorgio Moroder, is one of the most exclusive and sexiest nightclubs in the country and brings out the who’s who of fashion, music, lifestyle, it-girls, drag queens, celebutantes and debutantes.  DJ Adam XII has created one of the most exciting dance floors in years, spinning all classic disco with a modern point of view.

Giorgio’s is pleased to welcome back legendary Downtown NYC performance artist Joey Arias.  Since 1979, Joey has been wowing audiences with his pitch perfect performances of classic jazz and blues as well as his surprising and genre-bending cabaret shows. Arias was the star of Thierry Mugler’s Humanity and has played in such legendary NYC venues such as Carnegie Hall, Town Hall, Joe’s Pub, and a recent five-night sell-out at Disney’s REDCAT. Fresh off the road from a European tour, Joey enters the magical and intoxicating Giorgio’s with fresh material and a show to remember.

DINNER RESERVATIONS AVAILABLE AT ALMA AT THE STANDARD

To start the night, ALMA, one of LA's most beloved restaurants, is offering a special à la carte menu for Giorgio’s guests as it takes up an exclusive three-month residency at The Standard, Hollywood. Helmed by Chef Ari Taymor, the menu is comprised of delicately crafted dishes showcasing Taymor's nuanced use of flavors in an intimate setting. Seatings are available throughout the evening. Dinner reservations can be made by phone (323)-822-3131 or online.

WANT TO STAY WITH US?

You don't have to go home, but you can stay here. Giorgio's guests get 25% off rooms at The Standard, Hollywood for December 31st using promo code: GIORGIOS25. Visit StandardHotels.com/Hollywood to make your reservation now!