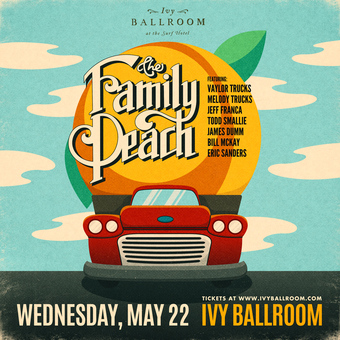 We are thrilled to have the all star lineup of musicians covering one of the greatest rock and roll band in history, The Allman Brothers!

OK
The Family Peach is an all star cast of musicians paying tribute to American Rock icons, The Allman Brothers. Led by Vaylor Trucks, son of the late drummer Butch Trucks of the original Allman Brothers, the band takes you on a rocking journey through the epic catalogue that has been the soundtrack to many an american life. Joining Vaylor is his sister Melody who sings and plays percussion. The experience and knowledge of these two royal offspring comes together with much respect to the originators. Surrounding them are Todd Smallie on bass (JJ Grey and Mofro), Jeff Franca on drums (Thievery Corporation), James Dumm on guitar, Bill Mckay on keys and vocals, and Eric Sanders also on drums (Atlanta institute of Music). This band of musicians brings years of experience and knowledge to their fresh take on the classic Allman Brothers.