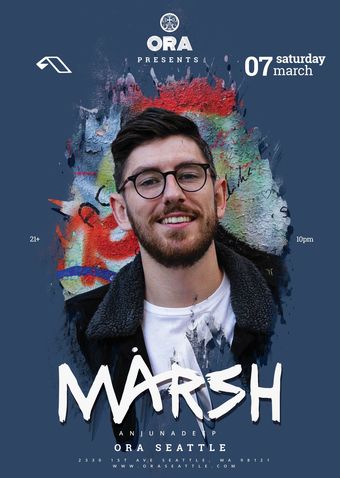 Tom Marshall, known to the world as Marsh, is a British deep and progressive house producer currently residing in Cincinnati, Ohio. Born to a musical family in Brighton UK, Marsh became a classically trained pianist at an early age. In 2009, he embarked on his music production journey and spent three years studying Music Technology at University in London.

Marsh’s passion for electronic music began with the three disk album compilation 'Classic Euphoria’. Over the years his musical tastes deepened, but always remained loyal to the emotions found in early trance music. These early inspirations have continued to contribute to Marsh’s signature atmospheric and melodic sound.

’Sleeping Now’, released on Silk Music in October 2012 grabbed the attention of Above & Beyond and was supported as ‘Record Of The Week’ and ‘Web Vote Winner’ on their radio show; amongst the top 10 most downloaded music podcasts on iTunes. Marsh has since remixed Above & Beyond’s ‘Counting Down The Days’, released on Anjunabeats in March 2016 and later received the invite to be the featured guest mix on the acclaimed radio show.

In June 2017, Marsh released his debut artist album ‘Life On The Shore’. ‘Make' from the album accumulated over 7.5 million streams on Spotify alone. Marsh spent the majority of 2018 producing a wealth of new music. Meanwhile his Spotify page has accumulated over 9.8 million streams and reaches 3 million listeners. In November, Marsh embarked on a new adventure with Above & Beyond’s Anjunadeep imprint. His label debut ‘Black Mountain’ was played on BBC Radio One.

Marsh is a touring artist, featured on the 2019 Anjunadeep Open Air tour and supporting Above & Beyond on multiple Group Therapy tour dates in addition to headlining some of the most prestigious venues around the world. Marsh was recently featured on the Anjunadeep Edition mix and has so far announced two EPs with the renowned label.