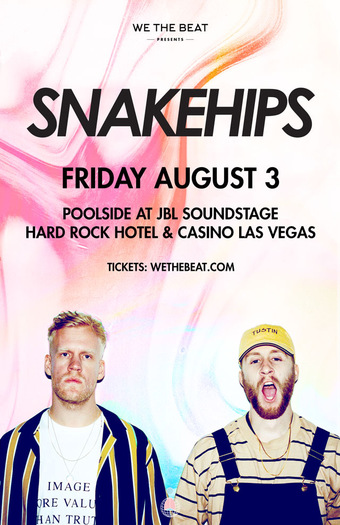 at The Hard Rock Hotel Pool

Snakehips are left-field downtempo synthesists of several genres, including rap, electronic, and a little R&B. The U.K. producers, Oliver Lee and James Carter, gained gradual notice from 2012 to 2014 with remixes of tracks by Willie Hale ("Groove On"), Wild Belle ("It's Too Late"), Bondax ("Gold"), Banks ("Warm Water"), and the Weeknd ("Wanderlust"). They also released a couple of their own light and shimmering singles. The first proper Snakehips release, 2013's "On & On" -- featuring Australian singer/songwriter George Maple -- was released on Hoffman West as a 12" limited to 250 copies and as a digital download. The bouncier second single, 2014's "Days with You," was fronted by Sinead Harnett (Disclosure's "Boiling," Rudimental's "Hide" and "Baby"). An EP titled Forever, Pt. 2 appeared in March of 2015, and the duo scored big with their next single, the yearning pop tune "All My Friends," which featured Chance the Rapper and Tinashe. Released in October, the song was a worldwide hit, particularly in Australia, New Zealand, and the U.K., where it hit the Top Five of the nations' singles charts. "Don't Leave," a collaboration with MØ, arrived in early 2017, followed by "Right Now" with Elhae, DRAM, and H.E.R., and "Either Way" with Anne-Marie and Joey Bada$$. In 2018, they joined St Rulez for "Cruzin'."
Non Profit Nightlife Concert Live Music
View nearby accommodations