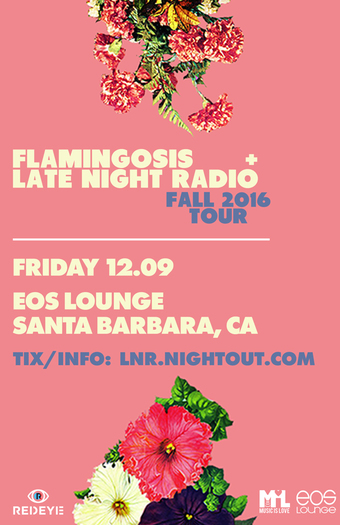 Coming up alongside Colorado's musical melting pot, Late Night Radio is earning the respect of fans and peers--endorsed by both Pretty Lights or Griz---for keeping his songs funky and inventive with an unshakable commitment to soulful grooves. Even when LNR breaks into high-energy, cabinet-rattling climaxes, the emotional depth remains. His wildly popular Vinyl Restoration series of old-school mixes has rooted his sound in deep, expressive sampling that keeps him firmly grounded in the lessons of the past, while reaching forward to craft his own signature sound.

New Jersey producer Flamingosis has made a career out of keeping the infectious vibe of summer alive in all of his music.  In the same vein as legends like J Dilla or Nightmares on Wax, Flamingosis's sample-based productions are best described as the thin line between hip hop, funk, and electronic music.  He just released his latest album, "Bright Moments," arguably his best work yet---and has been name-checked by Pitchfork, Hypetrak, and Gorilla vs Bear as one of their favorite releases of summer 2016!