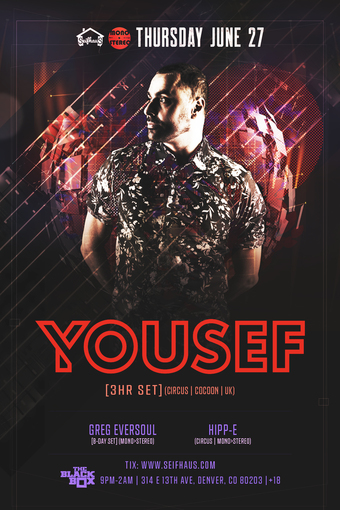 One of the biggest names to come to Denver in quite some time, on a Thursday no less! Yousef continues to be a driving force in underground dance music. 20 years of rocking the worlds best clubs & festivals have solidified his standing as an irrefutable global icon earning his place in the Radio 1 Hall of Fame.

General Terms
All items are non-refundable, all sales are final.
Age Restrictions
+18, ID required
Miscellaneous Restrictions
By purchasing a ticket, you are automatically enrolled in our mailing list. We promise to keep you in the loop with only the best music and experiences!

It's not often you get the opportunity and honor to debut an iconic international artist who has been inducted into the Radio 1 Hall of Fame earning his legendary status amongst the likes of Carl Cox, Moby, and Danny Tenaglia. We couldn't be prouder of this special booking, easily one of our biggest to date. Yousef will have you moving and smiling, with very few chances to catch a break, we can promise you that!

Opening the night will be two of Denver's most respected and influential pioneers who played pivotal roles in the establishment of the scene from its inception and still remain active contributors; Mono>Stereo's very own Greg Eversoul (performing a special B-Day set) and the globe-trotting Hipp-E who has just released a string of releases on Hot Creations and Yousef's own label, Circus.

Yousef continues to be driving force in underground dance music. Almost 20 years of rocking the worlds best clubs & festivals is reflected in the 4 decks live mixing, energy, excitement & control he puts into his performances. From deep house to blistering techno but always with the heartbeat of house music.

Yousef has appeared eight times on The legendary BBC Essential Mix and has been inducted into the Radio 1 Hall Of Fame joining the likes of Sven Vath, Dixon, Solomun and Richie Hawtin. His weekly radio show ‘21st Century House Music’ is on more than 100 FM stations worldwide, amassing over 20 million listeners per month.

As a producer and remixer no dj has released on more of the worlds most iconic labels than Yousef. He has appeared on Desolat, BPitch Control, Cocoon, Crosstown Rebels, Moon Harbour, Knee Deep in Sound, Hot Creations Hot Trax, Hearthouse and many more... whilst his own label Circus Recordings celebrates its 10th Anniversary in 2018 with releases greats like Green Velvet, The Martinez Brothers, Laurent Garnier and Eats Everything.

Yousef's legendary Circus event in his native Liverpool, championing the finest in house & techno since 2002, has become a cultural reference point for dance music in in the UK and beyond. Its this reputation that has seen the brand feature in events all over the globe and regular books literally every major name in house & techno. Carl Cox Sven Vath, Richie Hawtin, Ben Klock, The Martinez Brothers, Nic Fanculli, Robert Hood and endless more have joined Yousef in the last few months

With a total 14 completed dates in Ibiza during 2017 playing for the likes of Resistance at Privilege, ANTS at Ushuaia, Paradise at DC10, Labyrinth at Pacha, 2018 is shaping up similarly with 5 dates at Amnesia and more Dc10 and Resistance.

Yousef continues to show is multi artistic approach towards all projects, from his involvement in an amazing Atmos 3D surround sound show for Dolby, and this year opening up Circus Recordings Albums - a place where Yousef is gong to invest in breaking new artists on a global scale. The man is as relentless as his dj sets.

Uniting good people through good music under the same roof,taking the sound of the underground to the next level and spreading the passion for the masses.