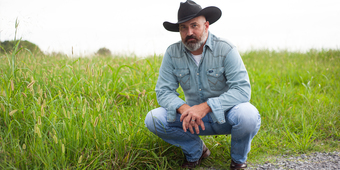 Embraced by fans from all genres, Yancy continues to build a dynamic following as he performs live. Yancy's raspy voice and range make him a consistent draw, which is evident by the success he has enjoyed sharing the stage with national acts.

OK
Vocal powerhouse Yancy Riley's music draws on the diverse cultural and musical influences of his home state, Louisiana. He credits his all-embracing style to the music imprinted on him during his early years, which ranged from soulful gospel to the realness and accessibility of country music. Yancy's value of family, his convictions, and his determination to succeed have empowered him to continue to mature into the artist he is today. Through this progression, he has learned the power of performance and the grace of delivery.

As a recording artist, Yancy has produced a new studio album titled expectations. Cuts from his album have received regional airplay and overwhelming fan response. Yancy's new album exemplifies both his writing and production, allowing him to create an album that showcases his soulful vocal approach and his ability to stir the emotions. The album reflects the passion Yancy has for the traditions of country music without compromising his unique approach to the genre and vocal styling by connecting with both days gone by and the days of now.
Live Music Nightlife Food & Drink Concert