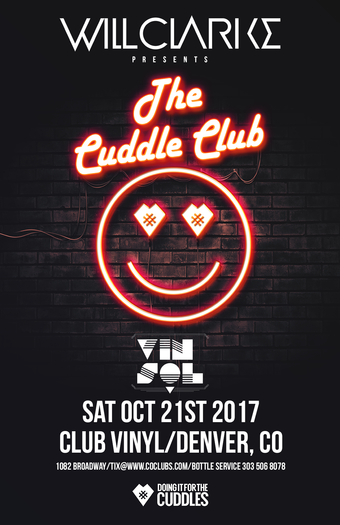 Will Clarke and Vin Sol

Will Clarke and Vin Sol

Bristol is renowned to be a generator of exciting fresh talent in all aspects of art. The fact that the bearded booty-cuddling machine, Will Clarke, is from this part of the world is no surprise to anyone.
Two years after Will’s ‘Big Booty’ was being played in every club around the globe from the likes of Jamie Jones, Seth Troller, Eats Everything and MK (just to name a few), Will has rocketed to great heights in the house and techno scene. Will has become a family member in the DIRTYBIRD flock, and has released a plethora of chart topping records such as ‘The Goog’, ‘Can You Funk’, also collaborations with Justin Martin with their track ‘Back To The Jungle’ and a collaboration with Shiba San, ‘Give It To Me’. Staying on the DIRTYBIRD theme, Will has just released his Booty Percolatin’ EP (which if you haven't heard yet, you are missing out). Alongside Will’s original releases, he has also churned out remixes for Riva Starr, Lee Foss’s label Emerald City, Hot Natured, Azari & III just to name a few.
In 2015 Will took it upon himself to start his radio show ‘The Barber Shop’ which has now had guests such as Groove Armada, Kolsch, MK, Yousef, wAFF and the list goes on. With over half a million monthly listeners across multiple platforms, Will’s Barber Shop is causing a little bit of a fuss.
Will Clarke’s live DJ sets are full of his unreleased music, edits and reworks. The fact that he played over 100 shows worldwide in his first year touring, proves that he is a force to be reckoned with.
So if you are into Booty’s Percolatin, beards or cuddles then make sure to check out Will Clarke.
With all of this under his belt, last year Will embarked on a Dirtybird tour of Australia and The Americas and finally to finish off 2015, he headed back to the US for several dates on the Get Real tour alongside Claude VonStroke and Green Velvet​. These dates alone saw Will appear at festivals such as Pete Tong​’s stage atWonderland, The Dirtybird Campout, Something Wicked Festival, HARD Day Of The Dead and SnowGlobe. He is currently at the beginning of his first Dirtybird tour of 2016, 25 dates across North America on the ‘Will & Bill’s Excellent Adventure’ tour with Billy Kenny ​including The Holy Ship and CRSSD Festival in San Diego. Coming up after this tour, Will is heading Down Under in May for his third Australian tour as well as a string of dates in Asia and the Americas later in the year.

Like many artists Will Clarke’s sonic palette comes his experiences and influences from home and afar. The roots of his sound stem from both his home town of Bristol, and his seasonal home in Ibiza, which have forged Will’s style; a style that fuses the best of Bristol’s bass elements with the upfront house music sensibilities of the white isle. Talking of his approach to productions Will says “I make music for clubbers, not DJs. I sample a lot of old school rave tracks from the 90s, with 21st Century production techniques.” Then add those little influences from Bristol and Ibiza and you will understand why Will’s music holds such a broad appeal and is often supported by the cream of the crop in the industry.

Coming up next, look out for Will’s ‘Bearded Booty Re­Rub’ of the electro classic Hashim Al­Naafiysh which will be exclusively given away via Annie Mac​’s Free Music Monday campaign via Soundcloud on Monday 25th January. This will be the first in a series of bootleg giveaways from Will entitled ‘Bearded Booty Volumes’. You can also catch Will’s brand new radio show The Barber Shop on Revolution Radio 93.5FM in Miami every 1st Thursday of the month at 23:00 EST. Not in Miami? No problem! Subscribe to the podcast via iTunes right here: https://itunes.apple.com/gb/podcast/the­barber­shop­by­will­clarke/id1065529281?mt=2

----------
West coast producer and Clone affiliate Vin Sol has been steadily banging the box creating his twisted takes on house, techno and whatever weird ass grey area that exists between the two. His sound is uncompromising; carefully crafted trax for the dance floor hinging on raw and stripped back grooves with relentless movement. This sentiment is also expertly conveyed in his DJ sets and mixes. Whether it’s releasing house 12″s with Tyree Cooper on vocals, sultry edits of the high priestess of Baleric Soul Sade with longtime collaborator and partner in Soo Wavey records Matrixxman, or creating straight up jacking mayhem for Clone Jack For Daze, Vin is paving his own distinct path of musical expression. With his production getting support from both techno and house heavy hitters like Marcel Dettmann, Larry Heard, Seth Troxler, Richie Hawtin, Len Faki, Scuba, Joey Anderson and Boddika.
Nightlife Live Music