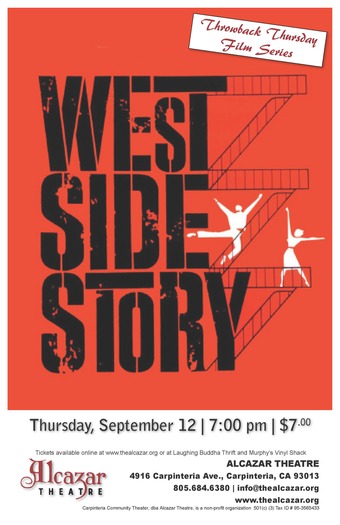 Alcazar Theatre
facebook twitter googleplus email
West Side Story is a 1961 American romantic musical drama film directed by Robert Wise and Jerome Robbins.This film is an adaptation of the 1957 Broadway musical of the same name, which in turn was inspired by William Shakespeare's play Romero and Juliet. It stars Natalie Wood, Richard Beymer, Russ Tamblyn, Rita Moreno and George Chakiris. Released on October 18, 1961, through United Artists, the film received high praise from critics and viewers, and became the second highest grossing film of the year in the United States. The film was nominated for 11 Academy Awards and won ten, including Best Picture, becoming the record holder for the most wins for a musical.

The film has been deemed "culturally significant" by the United States Library of Congress and was selected for the National Film Registry in 1997.