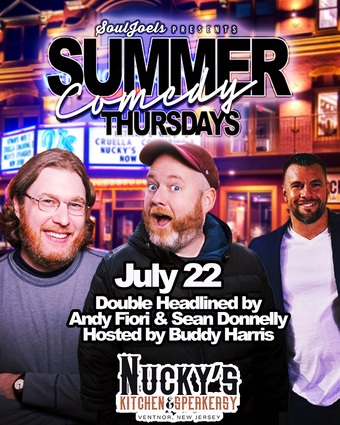 Andrew Fiori is a nationally touring Stand Up Comedian and Radio Personality based in New York City. He is regarded as one of the most dedicated and likable comedians working today. Time Out NY described his act by saying his "clever style is always enhanced by his affable onstage manner."

He has performed at the Montreal Just For Laughs Festival, JFL 42 in Toronto and the New York Comedy Festival where he was a finalist in New York's Funniest and is a regular at the world famous Comedy Cellar. He has made numerous appearances on Comedy Central and in 2016 he was honored to travel abroad to perform for the Troops in the Middle East.

Andrew is also an accomplished radio personality and producer. He is the host of The Raw Report on SiriusXM and is also a regular on The Bonfire, Bennington, and is the Executive Producer of the shows Come to Papa with Tom Papa and The Kelly Carlin Show.

His debut album, Plan B, was released in 2016 through Comedy Records and named one of the Best Albums of the Year by SiriusXM.

About Sean:
When he’s not catching a nap with his bulldog, Rickles, Sean can be found headlining clubs and festivals all over the country. He has appeared on The Late Show with David Letterman, Conan and NBC’s Last Comic Standing. Sean co-hosts the podcast My Dumb Friends with fellow comedian Dan St. Germain on the All Things Comedy network. He released his debut comedy album “Manual Labor Face” in 2015 on Comedy Central Records. Sean has been featured on the truTV series World’s Dumbest and Almost Genius as well as Adam Devine’s House Party, The Half Hour, Broad City, and Inside Amy Schumer on Comedy Central, Amazon’s Alpha House, GSN’s Lie Detectors, Limitless on CBS, and Billions on Showtime.
Food & Drink Nightlife Comedy