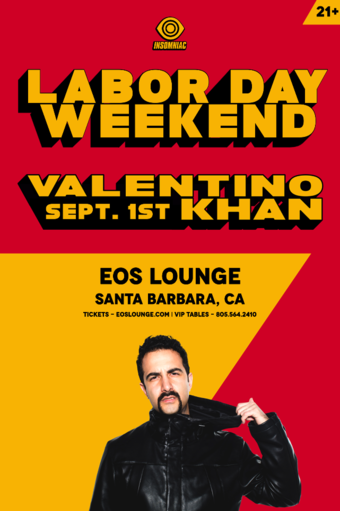 Valentino Khan makes everything. From hip hop club anthems to dance music hits, Valentino’s production knows no bounds. He has produced hip-hop for multi-platinum and Grammy award-winning artists and continues to create his own unique sound in the electronic music world as an artist.

Over his career, Khan has gained the support of artists like Diplo, Skrillex, Calvin Harris and many more noteworthy musicians. In 2015, he produced his original song “Deep Down Low” which recently was named as “Most played track by DJ’s in 2015” by 1001 Tracklists and Sirius XM Radio’s Number 1 Song of 2015 on Electric Area. He has also released collaborations with Skrillex, GTA & Flosstradamus and has been tapped for remixes by Axwell^Ingrosso, Dillon Francis, Diplo & Katy Perry among others.

Valentino released “Pump” in May on Mad Decent, which has already seen huge success. The track has already surpassed 3 million streams on Spotify, and was played at shows and festivals throughout the summer. This year alone he played at Ultra Music Festival, EDC Las Vegas and Nocturnal Wonderland, as well as a number of festivals and shows across Europe, Australia and Asia.

Khan is locked and loaded with a wide array of new singles lined up for release, including an upcoming single with Sean Paul. He’ll be on tour this fall with NGHTMRE, and you can catch him in Las Vegas at Encore Beach Club at Night.