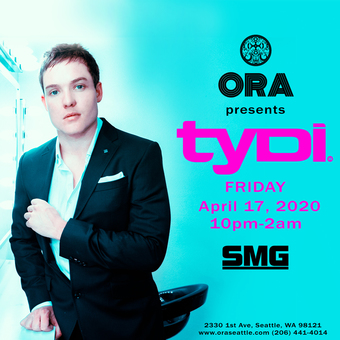 Tydi at Ora ( Will be Postponed )

Tydi at Ora ( Will be Postponed )

Refund Policy
All sales are final. No refunds or exchanges allowed.
Age Restrictions
Ora is a strictly 21+ Club. A current, non-expired, government-issued ID is required.

In his 15 years as one of the leading artists in electronic music, Australian songwriter, composer, record producer and DJ tyDi, née Tyson Illingworth, has seen, heard and done it all. Through his extensive discography, which includes five full-length albums, countless singles and remixes, and numerous EPs across diverse genres, he’s topped global charts, he’s toured the world and he’s made his indelible mark on the music world. Now, tyDi reinvents his sound once again via Collide, his forthcoming artist album set for self-release early 2018 via Global Soundsystem Records.
On Collide, tyDi bridges the worlds of electronic and orchestral music as he presents a completely new sound in uncharted territories. Collectively, the album threads a gorgeous sonic narrative built on precise composition, progressive musicality, intelligent sound design, layered songwriting and grandiose orchestral scoring. Through its 12 original tracks, Collide creates an unprecedented musical journey that transports listeners off the dance floor and into the concert halls.
Four years in the making, Collide unveils tyDi’s latest artistic evolution. It’s a hefty undertaking reflecting his developed skills as a songwriter and producer and traversing many styles and sounds. The first official album single ‘Closing In’ delivers dreamy synths that float over soft piano melodies and dance atop a beautiful brass section with a bed of majestic strings. The track also features the delicate yet powerful vocals of guest singer Dia Frampton, the runner-up in the inaugural season of NBC’s hit reality TV singing competition series The Voice, with whom tyDi collaborated on his 2014 single “Stay.” “Gold Blooded” charges open with an energetic intro of violins and live brass instruments before diving into a melodic halftime trap chorus featuring empowering vocals from artist ‘Dyson’, while “Fallen Angel” forges an intense and heavy ride through dubstep-tinged force and modern bass music. Longtime devotees find a special surprise in “Did You Know?” where tyDi revisits his trance roots with an orchestral twist: Chunky synthesizers and futuristic sequencers build a digital playground as lush strings and horns paint a cinematic backdrop while London Rouge angelically coos of love and longing. Elsewhere, tyDi offers up an intimate, introspective look on “You Don’t Love Me,” a personal reflection on love lost encapsulated by a vulnerable yet uplifting vocal performance from Tori Roper, who perfectly captured the powerful emotion driving the song atop a lulling electro house beat.
“I wanted to make something larger than life,” explains tyDi of the inspiration behind Collide. “I needed to impress myself by making an album that’s so detailed, so thorough, so musically complex that you couldn’t copy it. This album is so uniquely me; it cannot be duplicated.”
Collide is a continuation of sorts of tyDi’s 2014 album Redefined, a major effort that saw the producer’s first foray into live elements and instrumentation via his use of string quartets, violas, violins, double bass, guitarists, live vocalists and much more throughout. Collide also sees tyDi implement his conservatory training as well as his academic classical music degree and musical upbringing. After he began his initial musical career as a drummer in his teenage days, tyDi went on to graduate from the prestigious Queensland Conservatorium Griffith University in his native Australia, where he received a bachelor’s degree in music and music technology. In 2015, the university awarded him the Griffith University Young Outstanding Alumnus of the Year for his contributions to the music industry.
An accomplished musician in his own right, tyDi enlisted 2 X GRAMMY award winning composer and seasoned vet Christopher Tin to help bring Collide to the masses. Best known for his composing and scoring work across the concert music, film and video game industries, Tin has won multiple awards and accolades: In 2011, his choral piece Baba Yetu from the video game Civilization IV became the first piece of video game music to ever win a Grammy Award, while his album Calling All Dawns took home a second Grammy for Best Classical Crossover Album that same year.
“To make my dream album, I needed someone experienced who was a king in the composing world,” says tyDi of his collaboration with Tin. “This is the type of composition you can only get from an entire orchestra, and I owe so much to Christopher.”
For tyDi, it all now comes full circle on Collide, his most ambitious and most challenging project to date.
“When you watch a film with an intense score, you’re swept away to a different planet. The atmosphere, emotions, melodies and instruments captivate you. That feeling doesn’t always enter the dance realm. I wanted to capture that magic and bring it to the electronic world.”
Still, all the minute details, all the long hours in the studio and all the sleepless nights that went into the album are clearly evident throughout Collide. And, according to tyDi, this is only the beginning.
“I’m at a point at my career where I’m not satisfied doing the same thing. All the ambition, all the drive behind this album comes from the need and internal desire to combine every single thing I’ve ever learned in my musical career and put it into this project, to show everyone what I’m capable of.”
www.tydi.com
www.twitter.com/tydi
SPOTIFY - https://open.spotify.com/artist/7tOUuyCplrFWLXCZuhE3C4?si=LE_c9HYrRFuhzuFS768qsg