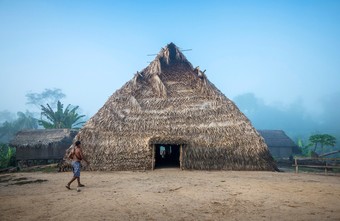 Tribes on the Edge with Celine Cousteau

The Ritz-Carlton Bacara, Santa Barbara is delighted to host a screening of Céline Cousteau's film, Tribes on the Edge, on Wednesday, July 31st, 2019 at 6:30pm. The event will begin with a cash-bar cocktail reception, followed by the film and a question and answer segment. The film explores the timely topics of land threats, health crises, and human rights issues of the indigenous peoples of the Vale do Javari in the Brazilian Amazon.

Tribes on the Edge with Celine Cousteau

OK
Tribes on the Edge – an independent documentary directed and produced by Céline Cousteau, explores the timely topics of land threats, health crises, and human rights issues of the indigenous peoples of the Vale do Javari in the Brazilian Amazon, expanding the view to how this narrative is relevant to our own lives. This is a story that invokes the critical importance of respect and care – for land, culture, and humanity. Our survival may depend on it.
Home to 6 recognized tribes plus the largest concentration of un-contacted indigenous peoples in the entire Amazon (and some say the world), the indigenous territory of the Vale do Javari in the Brazilian Amazon spans 85,000 Sq KMs (the size of Portugal) and has been listed as ‘irreplaceable” by the IUCN because of its incredible biodiversity. Considering there is no deforestation in the Amazon where there are indigenous territories, this human presence provides a barrier to the destruction of the ecosystem and its flora and fauna. With the current assault on the Brazilian Amazon and its inhabitants because of political and economic interests, there is urgency for this story to be shared.
The peoples of the Javari face threats to their survival because of encroaching illegal activities such a hunting, fishing and gold mining. The Brazilian government led by Bolsonaro is slowly dismantling all protection of their land and their human rights. Each day these 5000 indigenous warriors are fighting to protect their home and protect those living in isolation. This fight is relevant to all of us because they act a crucial barrier to deforestation and thus are a stronghold for climate change mitigation and preservation of biodiversity.
Humans and nature are intimately interconnected. Where there is environmental destruction, humans suffer. In the Brazilian Amazon, where there are indigenous communities, there is no deforestation. If they vanish, we lose the guardians of vital ecosystems and thus may lose that ecosystem as a result. More than a film, it has grown into a movement driven by a passionate effort to enact tangible impact in the through Action, Communication and Education (ACE) initiatives. Tribes on the Edge reminds us all that our survival depends on our actions - to support and protect the people and the ecosystems they safeguard for the benefit of us all.
Céline Cousteau is a humanitarian and environmental activist working with a variety of mediums that range from documentaries to art, from consulting with corporations and foundations to public speaking. Each form shares the same message of interconnectivity between humans and the natural world. As a documentary film director, producer, and presenter, Céline is the founder and executive director of CauseCentric Productions, creating cause-focused content. Extending her family legacy and her expertise, Céline co-founded The Outdoor Film Fellowship, a nonprofit program whose mission is to empower young the next generation of filmmakers, creatives, and activists to inspire change through leadership, film, and the arts. Céline is ambassador for the TreadRight Foundation, on the board of directors of the National Aquarium in Baltimore, and the advisory boards of The Himalayan Consensus and Marine Construction Technologies. Her previous work has included being Guest Designer for Swarovski and Member of the World Economic ForumCouncil on Oceans. With a degree in psychology and a masters in Intercultural Relations, Céline is fluent in three languages.
Non Profit Charity & Causes

Low-rise villas with wrought-iron balconies. Beaches that glow under the sun. The water at your doorstep. Vibrant blues and intricate patterns. Food that is meant to be savored with the sunset. The Ritz-Carlton Bacara, Santa Barbara embodies the charm, beauty and energy of the Mediterranean in the heart of Santa Barbara, offering ocean-view accommodations, an indulgent spa and dining that celebrates local ingredients.