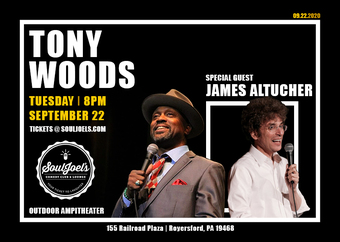 Tony Woods is a one-of-a-kind comedic legend that is always in control of his audience.  A seasoned veteran in the comedy business, Tony is recognized not only by fans but by his peers as one of the best and most engaging comedians in the business.
Tony has a strong following in the US, UK, Australia and Europe. Born in North Carolina and raised in the D.C. area, Woods kicked off his career as an original member of Russell Simmons' Def Comedy Jam on HBO and P. Diddy's Bad Boys of Comedy, he is an all-round veteran and one-of-a-kind comic. His playful and cool demeanour, combined with sharp and mischievous subject matter, create a show that is unmistakably entertaining at every level. A natural entertainer, Woods understands an audience and encourages them to become part of his strange world.
Tony’s recent appearances Comedy Central Presents Tony Woods, Comedy Central USO Tour, and Comedy Central World Comedy Tour have made him a comic favorite of international renown. He has also appeared on Last Comic Standing, A&E’s Caroline’s Comedy Hour, Showtime at the Apollo, NBC’s Friday Night Videos, Just for Laughs, NYPD Blue, HACK, Late Night with Conan O'Brien, HBO Comedy Spot and Asutralia's - The Footy Show.
Woods has also appeared in the film The Brooklyn Project, and his festival appearances include triumphs at the Just For Laughs Comedy Festival in Montreal, the HBO U.S. Comedy Arts Festival in Aspen, Colorado, the Melbourne Comedy Festival and is a favourite at the Sydney Comedy Festival.