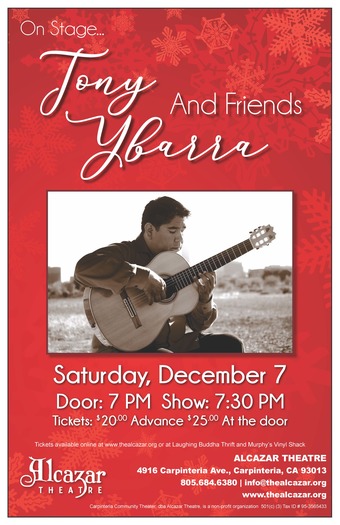 Kick off the Christmas season with a very special night of music!

Alcazar Theatre
facebook twitter email
Join us on Saturday, December 7 at 7:30 pm as we present a special night of music with Tony Ybarra and Friends.

Born in Santa Barbara, California, Tony Ybarra  has been playing music his whole life. Tony is an active, sought out guitarist and recording artist in many styles. His music has been featured in movies, TV shows and commercials. He has recorded 6 albums under his own name and recorded music for the Compass label which has been featured across the United States. He is recognized as an authority in Flamenco and Latin styles.  His understanding of these diverse styles has led him to craft out his own sound that is melodic, intimate, rhythmic, and sophisticated.

Tony has performed in Europe, Hong Kong and across the United States. He continues to perform at many venues throughout California. Most recently, Tony has recently collaborated with 5 time Grammy award winning artist Michael McDonald and has performed with Josh Groban and legendary jazz composer and Grammy winner Maria Schneider. Tony also performed with flamenco guitar virtuoso Adam Del Monte and his quintet at the historic Wilshire Ebell Theater in what the L. A. Times hailed as a “great show". In his career, Tony has been invited to perform for Barack Obama, Kevin Costner, Troy Aikman, Clay Matthews, Ginnifer Goodwin, Josh Dallas, Cuba Gooding Jr., Johnny Deep, Keira Knightley, Orlando Bloom, Geoffrey Rush and the entire cast of Pirates of the Caribbean franchise.

Tickets: $20 Advance $25 at the door (if available)
Live Music Concert