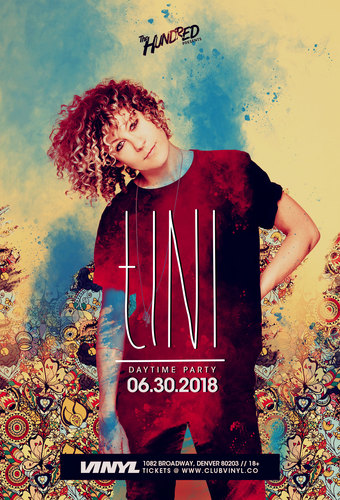 It took tINI only a few years of playing in clubs to become one of Germany’s most highly acclaimed female artists in techno and house music.Her involvement with rhythms and beats started at the age of 7, when tINI, who is originally from Munich, began playing drums, while the curiosity and passion for sounds finally led her to first production attempts on her brother’s Atari. While her general interest in music has been aroused by new romantics, wave and grunge, her first dj adventures started with underground hip hop to rap. As her interest, knowledge and skills developed, her DJ style became more electronic when she stumbled upon Moodymann’s “Amerika”.It was in summer 2003 that tINI started playing frequently in clubs and events in and around Munich. First DJ appearances throughout Europe and her first own nights and residencies followed soon.In 2008 tINI joined Desolat and the Artist Alife family, after she caught attention of Loco Dice during few performances at the same spots. No doubt this was an initial spark. Becoming a constant part of the worldwide Desolat nights by that time, her profile assumed shape, while more and more clubs became aware of the curly haired talent with that powerful, vivid temper, who intuitionally knows how to enchant her crowd whether during smart-building warm-up or igniting main-time sessions.“That’s right“, her production debut on the Desolat X Sampler in 2009, became a timeless groove monster with high profile DJs worldwide and a perfect proof that future is looking bright for this grand dame of deep twisted tech funk.Residencies for Ibiza’s original Ushuaia, London’s in-demand “Fuse” events and Cocorico in Italy plus being the official tour support for Marco Carola on his worldwide album presentation were just a few highlights of recent months.The most significant highlight of this unique career has been saved for autumn 2011, when her debut artist album gets released on her label homebase Desolat.As tINI's life is ruled by magic moments and deep acquaintanceships, her first longplayer has been named after her best friend "Tessa", who was the first person to introduce her to the colourful, sometimes dreamlike world of Ibiza, where tINI spent the summer of 2010 and produced a majority of her album. It's a musical documentation of an influencing stage of life, inspired by a chaotic but at the same time peaceful island and special people she met there and who can even be heard in many of the tracks.Deeply. Impulsively. tINI.