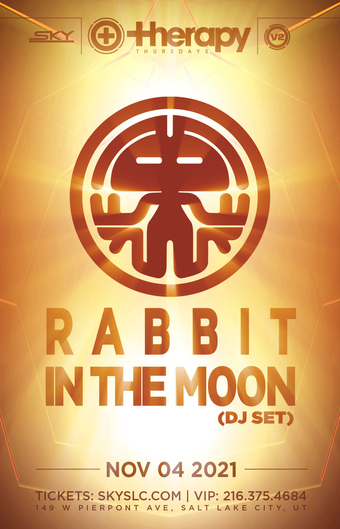 Therapy Thursdays : Rabbit In The Moon

The finely tuned Rabbit In The Moon crew is poised for another headlining performance at Therapy Thursday, November 4th 🌗 These experts of the DJ art are just as infamous for their incredible live show as they are for their diverse music selections. Get ready to dance all night away! ✨

Rabbit In The Moon

R.I.T.M. is an intense electronic act that combines dance, techno & progressive house with an unforgettable live stage performance. Decade is their new combo CD/DVD featuring previously unreleased, re-mastered songs and music videos. Each song is an expression of visual music performed like an electronic circus with abstract narratives and dynamic presentation. Ritm creates these live submersive environments by designing all encompassing experiences for their fans.

Star Shine is one new song featuring the worlds first full body video suit. It was constructed using over 1500 full color spectrum LED lights that display video. LED lights also have a bright deep saturated quality that has to be seen live to truly be experienced. Ritm has taken this cutting edge technology and created a break through in visual music performance. Bunny has designed an incredible custom leather suit to house the LED lights and painstakingly constructed this piece of wearable art. VJ Tek plays custom video content that is mapped to Bunnies suit while he performs against a video backdrop. In essence, this is an audio visualization of the music composed by David Christophere and Bunny that plays in real time. “These shows are live sonic research that we have been doing for 10 years”, stresses VJ Tek. The video suite started as a brainstorm and was conceptualized over a five year period.

Being an independently produced band supported by the love of their fans, they have made a conscious decision to put on a show that really performs music through unique costuming and dance. They have fought to have their music presented in this way and it has earned them a great deal of respect. Rabbit in the Moon has been called “The Grateful Dead” or “Pink Floyd” of electronic music, while their fans are referred to as “rabbitheads”. People have been so inspired that they have even gotten tattoos of the bands logo!

“We have been honored to play in such locations as a rain forest in New Zealand, a 10th Century castle in Spain, and at Ricon beach in Puerto Rico” says VJ Tek in his studio who also refers to the performance as “visual poetry”.

All of this experience and dedication to create has made Ritm pioneers. Most people’s first exposure to rabbit was to their song called out-of- body experience “O.B.E.”. O.B.E. was released in 93, and to this day, is still played in clubs around the world. In 2003, Muzik magazine listed O.B.E. as the number one most sought after record in the last decade. After the release of “phases of an out of body experience” (the remixes of O.B.E.), on Hardkiss Recordings in ’94, the demand for Ritm became enormous. They began collaborating and doing remix work for everyone including: Goldie, Sarah McLachlan, Garbage, Smashing Pumpkins, Sven Vath, Stone Roses, and Eric Clapton, Tori Amos. Their style of electronic music is favored by so many for being timeless. All of these things spawn from a band that has not graced the screens of music television. Alternately, Ritm has been on a grass roots journey, making believers out of crowds, one show at a time. David Christophere and Bunny have been collectively writing new music and continue to develop their vision. VJ Tek has been pushing this process and arming Bunny with amazing visuals from his collective posse of visual artists and friends. Ten years ago, David had an awakening one night at an underground party in Orlando. He saw an opportunity to fuse a new spiritual vibe into the music. So he began working on a sound that would change their musical destiny and influence the next generation of dance music forever.

Jila, their newest addition is a performance fire dancer. Her mystical Shiva performances have helped capture David’s vision of spirituality. Her popularity in the show has grown and has been sited by fans as “hypnotic” on numerous web blogs.

Rabbit in the Moon’s live shows have exploded into full-blown productions. Including the use of live instruments by David Christophere and guest artists, vocals and costume performances by Bunny, interactive video by VJ TEK, fire performance by Jila, and custom pyrotechnics. The new CD/DVD release “Decade” will also air in full high definition on HD network but, to truly understand you must experience it for yourself!