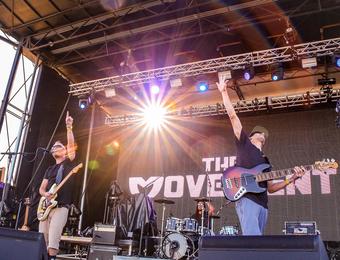 We are so excited to bring you The Movement at the Ivy Ballroom! They have a reggae, rock and hip hop vibe, that we think you will love!

General Terms
All items are non-refundable, all sales are final.
Age Restrictions
Guests under the age of 18 must be accompanied by a parent or guardian.

OK
The Movement has been winning the hearts and minds of alternative-reggae fans since their inception in Columbia, SC in 2003. Drawing inspiration from Sublime, 311, Slightly Stoopid and John Brown’s Body, they’ve come to be known as musical shapeshifters with a foundation of heavy drum and bass. Today the band consists of founding member, lead vocalist, and guitarist Joshua Swain, bassist Jason Schmidt, drummer Gary Jackson, and keyboardist/multi-instrumentalist Matt Goodwin. Their sixth studio album, Ways Of The World, will be released on June 7, 2019, as the highly anticipated followup to 2016’s #1 Billboard Reggae album Golden.
Live Music Concert