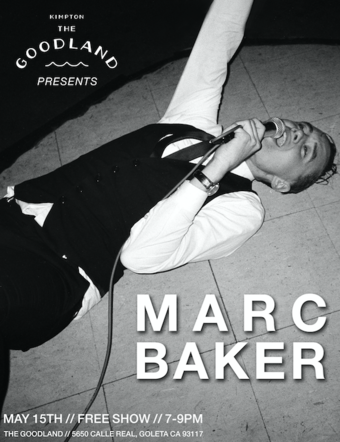 Come and enjoy free live music at the Goodland Hotel in Santa Barbara with a musical performance by Marc Baker on Tuesday, May 15th from 7 - 9p. This is a free all ages event.

Marc Baker brings a punk attitude to pop and modern romance to punk. He performs in a three-piece suit, and throws white roses into the crowd. The Melbourne born and bred singer gives his all with class and inimitable panache. He swings the mic around his neck, creating a contagious frenetic energy. The music, too, is reflective of all these things compounded with the indelible melodies prevalent on the records he grew up listening to, which continue to serve as inspiration. Filtered through his and producer Benjamin Plant’s (MIAMI HORROR) discerning ears—the music recorded during their sessions yields a contemporary spin on that beloved, vintage sound. The Four Oh Five dubbed “No Place I’d Rather Be,” his debut single, the song of the summer; claiming it is “three minutes and 46 seconds of pure euphoria.” Further to that, the song illustrates the emotion Baker so brazenly wears on his sleeve: “There is no place I’d rather be than next to you, holding hands, watching the world fall to pieces,” he sings. But it’s the yearning expressed—that desire and desperation to connect—which is most revelatory about Baker and the timeliness of his arrival. Sure, while that sentiment of longing is no stranger to song—it’s perhaps even more relevant today, where connectivity, though ostensibly at our fingertips, has never been so far away.