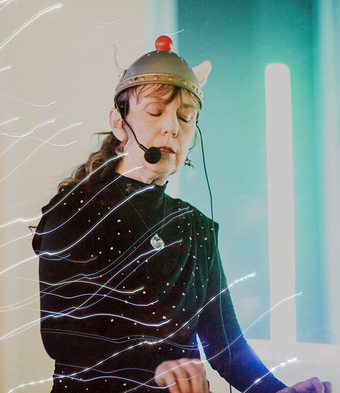 The Bay Area Return Of The Space Lady

The Space Lady Is Back!

The Bay Area Return Of The Space Lady

OK
One Night Only!
After her sold out Verdi Club show, Oasis proudly welcomes back The Space Lady, by popular demand

In the 1980s and 1990s, Susan was a street musician in Boston, Massachusetts and San Francisco, first playing accordion to accompany her gentle soprano voice. Wearing a silver plastic helmet with white wings and a flashing red light on top (which she performs in to this day), and playing haunting ethereal covers of rock n roll classics, Susan got the name "The Space Lady" from fans and from a newspaper contest. She upgraded from accordion in 1983 to the then-new Casiotone MT-40battery-operated keyboard, played through a battery-operated amp. Her classic song, "Synthesize Me," was written by her late ex-husband Joel Dunsany, at the time of that change to synthesizer.

Retiring from music in 2000, Susan left San Francisco, and returned to Colorado, to care for her aging parents. Attending La Junta's Otero Junior College, she earned a nursing degree, became an RN, and started work as a charge nurse in a nursing home. Her involvement with music narrowed to selling the odd CD ("The Space Lady Live in San Francisco") of recordings she'd made on a cassette recorder in 1990, and later digitized. But a year later, music historian Irwin Chusid released his book and CD-compilation paean to 'Outsider Music,' Songs in the Key of Z. The Vol. II CD included TSL's cover of "I Had Too Much to Dream Last Night" (by Annette Tucker/ Nancie Mantz). Unknown to Susan, this led to increased interest in The Space Lady's whereabouts and availability, fueled further by internet-bootlegged copies of her CD.
In 2008, she met – and a year later married – Eric Schneider, himself a songwriter/singer/acoustic guitarist, performing as "Eric Ian" (his actual middle name). Not a pop music fan, Eric had never heard of The Space Lady. The two formed a duo, with Susan accompanying Eric on his original songs, singing harmonies and playing accordion, alternating with silver flute solos. But it never got off the ground. In 2012, after becoming curious about Susan's previous life as The Space Lady, Eric challenged her to play for him electronically. When she re-assembled her gear, and played "Ghost Riders in the Sky" (by Stan Jones) for him, he urged her to come out of retirement, and play, not on the street, but in clubs and other indoor venues. When she hesitated, he promised to manage her – calling on his years of experience managing seminars.