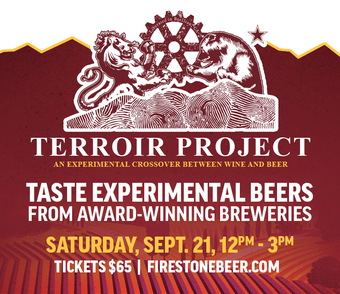 A genre-bending journey into the mysterious space between wine and beer.

General Terms
All items are non-refundable, all sales are final.
Age Restrictions
This is a 21 and over event.
Miscellaneous Restrictions
No outside food or beverage allowed.

Welcome to The Terroir Project—a genre-bending journey into the mysterious space
between wine and beer.

Thousands of years of fermentation science are set collide on September 21st as 12 breweries unveil a collaborative experiment into the emergent world of wine-beer hybrids.

From the West Coast to the East Coast, London to New Zealand, each participating brewery was invited to produce their own distinct hybrid, but with three binding stipulations: they all had to use the same grain bill; the same maturation period in barrels; and the same co-fermented percentage of wort and wine grapes. The kicker: all grapes had to be grown within 100 miles of each brewery.

The result is an unprecedented exploration into how “terroir”—or sense of place—drives what we taste. Enjoy tastes from our project breweries, guest breweries and guest wineries!

Firestone Walker Brewing Company is renowned for crafting iconic pale ales and pioneering barrel-aged beers on California¹s Central Coast. Everything we do revolves around one goal; to make the world¹s best beers.