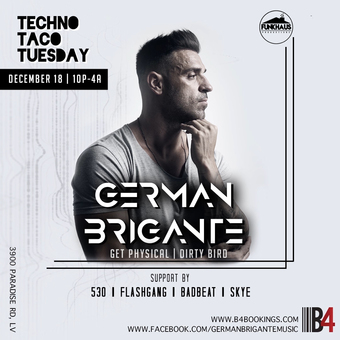 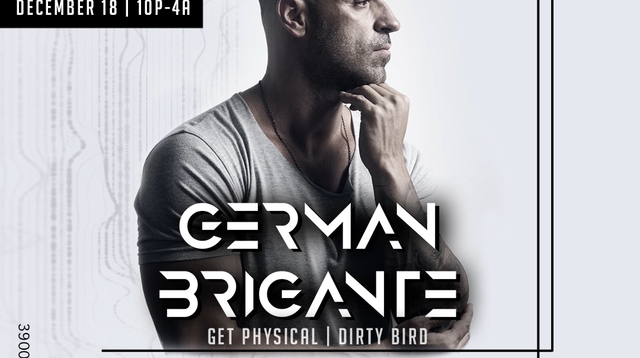 German by name but Spanish by birth, German Brigante is an artist whose passion and dedication to producing infectious dancefloor grooves is unsurpassed. His ever growing popularity within the electronic music fraternity was cemented by his position in Resident Advisor's Most Charted Artists Of 2013 chart which saw him rated No.56 – quite an achievement when you consider just how many artists are involved in our scene.

Hailing from the south of Spain, German Brigante is focused on a bumping, groovy form of tech house that aims straight for your hips and keeps dancefloors filled with energy. From his use of percussion to the deadly basslines he designs in his lab, German's sound is unmistakable and made to make people move.

Recent releases have come via some of the industries most renowned sources, including Get Physical, Saved, Off Recordings, Defected and many more. He is just as comfortable working with other artists as he is on solo projects, hence studio sessions with a variety of collaborators can also be found in this exciting artist's dynamic back catalogue.

As his popularity continues to increase so too does his thirst for making and playing the music he loves. Whether it be DJing in clubs across Europe and America to spending his time in the studio cultivating irresistible new grooves, German's passion shows no signs of relenting and he steps ever close to achieving greatness...

Funkhaus Productions is about creating fun and funky experiences for the Las Vegas electronic music scene.