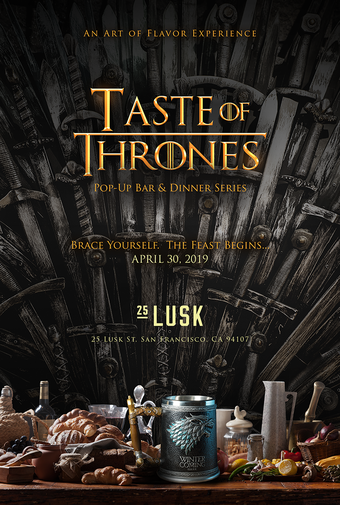 In Celebration of the Final Season of HBO's  "Game of Thrones"

A Feast fit for a King & Queen
After 7 weeks of sell-out dinners in 2017, our last dinner selling out in less than 6 HOURS after publicly announcing, Art of Flavor is very excited to bring our "Taste of Thrones" experience to an all-new exciting level in partnership with award-winning 25 Lusk restaurant and lounge showcasing the talents of James Beard Featured and Michelin Star Awarded Chef Matthew Dolan and his own culinary interpretation of the HBO television show phenomenon "Game of Thrones".
So come eat like a Stark and drink like a Lannister!

25 Lusk
25 Lusk St. (Off Townsend Street between 3rd & 4th Street)
San Francisco, CA 94107
Seats are extremely limited.
Last "Taste of Thrones" dinner sold out 6 HOURS after announcing!
So purchase your tickets quickly to secure your spot on the Throne!
Please spread the word to other "Game of Thrones" and "foodie" friends!!!

CUSTOMER QUOTES FROM PAST YEAR'S DINNERS

"An absolute must if you're a Game of Thrones fan!"

"Food and service was fantastic."

"A+ on atmosphere and décor."

"Great ambiance, great flavor, a night that Game of Thrones fans will cherish!"

"The atmosphere and theme felt true and authentic."

"It was awesome. The atmosphere, the food,

and the people that actually know what you're talking about when it comes to the show."

"Taste of Thrones conquered the seven kingdoms of my stomach!"
"Service were spectacular!"

"Everything was wonderful! Crowns off to the chef!"

"Would recommend it all of my friends - GoT fans or not!"

"Enemies to the North, the South, the East, but my table & belly are full of allies tonight."

"Shame! If you miss this event!"

"Way better than the Red Wedding!"

"A must do for any true GoT enthusiast! The atmosphere and conversation take Sunday night right through to Monday! So Fun!"

THE TASTE OF THRONES EXPERIENCE

Due to the unique nature of this medieval feast event,

Chef Matthew Dolan received his formal training at the Culinary Institute of America in Hyde Park, New York and credits his work alongside professionals who honored the craft - including many "salty old European chefs" that ran well organized and disciplined kitchens - as providing him with the fundamentals he needed to excel. From New Orleans, New York City, Nantucket Island, and Helsinki, Finland, he has strived to improve his technique while being exposed to a variety of restaurant environments. Dolan became part of the San Francisco dining scene with a successful run as executive chef at Garibaldi's on Presidio. At Twenty Five Lusk, Dolan realized his dream of building his own kitchen, where he continues to deliver inspired cuisine that demonstrates his passion and commitment to excellence. He is a member of the US State Department’s American Chef Corps, has been featured at the prestigious James Beard House on three occasions, earned a coveted Michelin Star, authored the fish cookbook “Simply Fish”, and continues to make numerous television and radio appearances here in the San Francisco Bay Area.  Dolan is delighted to apply his culinary artistry towards a "Game of Thrones" inspired dinner!
ABOUT SOMMELIER CEZAR KUSIK

Upon moving to San Francisco in 1996 Cezar Kusik started his career in the restaurant Industry. His first jobs included bartending gigs at 15 Romolo and The Black Cat in North Beach. In 1998, unaware if its international wine reputation, he started working as a bartender at Rubicon Restaurant whose world class wine program was led by Master Sommelier Larry Stone. Under Larry’s tutelage Cezar passed the Court of Master Sommelier Certification. While at Rubicon Kusik had the privilege of working and tasting with some of the best professionals in the industry. In 2005 upon Larry Stone’s departure from Rubicon, Kusik was promoted to the position of Wine Director which he held until the restaurant’s closure in 2008. Cezar also worked as an independent wine consultant and wine educator conducting wine tastings and classes for restaurant professionals and creating wine lists for numerous Bay Area establishments.  In 2010, Kusik opened the highly acclaimed 25 Lusk Restaurant as Wine Director and later promoted to his current position as Beverage Director.  Cezar's tremendous knowledge of wines and all types of alcoholic beverages makes him the perfect candidate to curate and lead our Taste of Thrones' Tyrion's "I Drink & I Know Things" pairing experience!

Located in the bourgeoning China Basin neighborhood of San Francisco's SOMA district, 25 Lusk is a modern restaurant and lounge featuring seasonally driven New American cuisine, a dynamic wine program, and expertly crafted cocktails. Award winning architect Cass Calder Smith won top honors for his multi-million dollar design that weaves a modern aesthetic through a historic brick and timber warehouse originally built in 1917 as a meatpacking and smokehouse facility.  All of the original exposed brick and massive timbers are still in place, creating a warm and inviting ambiance while maintaining the building's classic, industrial aesthetic.  Perhaps the most unique element of the 25 Lusk transformations is the open space from the main dining level to the lounge below. This design unifies the two-level space while still allowing each level to exist as a distinct venue.  Our "Taste of Thrones" Pop-Up Bar & Dinner Series will be taking over 25 Lusk's  one-of-a-kind basement level bar and lounge called the "Social".

ABOUT “THE ART OF FLAVOR”

Where chefs are artists, your plate their canvas, your meal their masterpiece.

The Art of Flavor turns restaurant dining into a ticketed culinary experience.  Art of Flavor gives chefs the opportunity to artistically express themselves to culinary thrill seekers and "food porn" lovers.  Chefs are creatively challenged to design their own unprecedented dining experience into a one-of-a-kind event. Culinary artwork becomes not only about stunning plate presentations, but also about innovative flavor profiles and progressive cooking techniques. The Art of Flavor creates an intimate opportunity to get to know chefs as they lead a culinary journey, course by course, narrating and educating guests on each plate's origins, inspirations, philosophies, ingredients and techniques.
To learn more about The Art of Flavor,
please visit www.art-of-flavor.com.
Food & Drink

ABOUT “THE ART OF FLAVOR” Where chefs are artists, your plate their palette, your meal their masterpiece. “Chefs are American culture’s new rock stars” – The New York Times The Art of Flavor turns restaurant dining into a ticketed culinary experience. Art of Flavor gives chefs the opportunity to artistically express themselves to culinary thrill seekers and food adventurers. Chefs are creatively challenged to design their own unprecedented dining experience into a special one-of-a-kind event. Culinary artwork becomes not only about stunning plate presentations, but also about innovative flavor profiles and progressive cooking techniques. The Art of Flavor creates an intimate opportunity to get to know chefs as they lead a culinary journey, course by course, narrating and educating guests on their origins, inspirations, philosophies, ingredients and techniques. “Now food is a show” – Culinary Institute of America The Art of Flavor will also feature sommeliers, cicerones, mixologists, vintners, brewmasters and distillers, showcasing their artistry in pairing fine wines, craft beers, craft cocktails and artisanal spirits that tantalize the palette while accentuating the flavor of a chef’s dish. The Art of Flavor provides a new platform for wine, beer and spirits experts to narrate their art and craft as well as educate drink enthusiasts on what makes their creations and pairings so compelling and conversation-provoking. LET THE MEALS BEGIN...