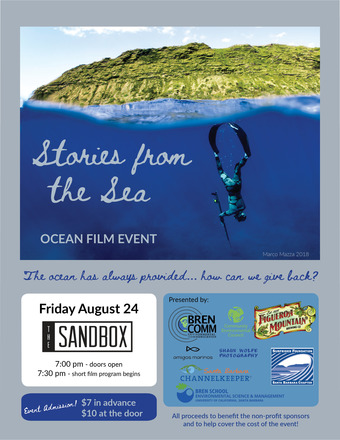 The ocean has always provided— how can we give back? Eight short films about our relationship to the ocean

General Terms
All items are non-refundable, all sales are final.
Age Restrictions
None

Stories from the Sea: An Ocean Short Film Event

The ocean has always provided— how can we give back?

Join us for an evening of inspiring films about the ocean: how we connect to it, how we inadvertently damage it, and how we can take steps to heal it and help preserve its vital role. Come see eight short films (~1 hour) about the ocean and hear from local non-profits working in marine conservation. Stay for a short Q&A with filmmakers after the screening!

Isla Vista: Below the Surface, Marco Mazza, 2018 * selections from film only *

Sea Change: The Battle Against Poaching in Palau, Vacationland Studios, 2018

Cities of the Sea, California Natural History Group, 2018 * selections from film only *

The spiritual, life-giving role of the ocean runs deep on Hawai’i. Meet Pua Case, a cultural practitioner, activist, dancer, teacher, chanter—and storyteller. She explains the deep connection that her people have had with the land and sea in Waimea on Hawai’i Island, and how this ancestral knowledge can help restore our relationship with the ocean environment.

The deep blue waters off the small Pacific island nation of Palau are teeming with fish. Its rich waters bring the biggest tuna and prized fish—and also the most illegal fishing vessels, threatening this unique ecosystem and its fisheries. But a dedicated team has come together to monitor fishing activity and change fishing techniques to reduce underwater “roadkill” and keep fish populations strong. Meet this team and see what it takes to help prevent ocean poaching.

Two ships meet in the Indian Ocean: one is there to illegally take tuna, while the other is there to stop them. Follow the team of dedicated anti-poachers on the Sea Shepherd as they try to intervene to prevent the use of a brutal fishing technique. *trailer for the upcoming series*

Rapid urban coastal growth has put strain on oceans and waterways around the world. Waste is frequently generated faster than it can be captured, diverted, or contained. Guanabara Bay in Rio de Janiero is the perfect example, going from a vibrant waterway to a deadzone with raw sewage. But a committed group of locals, the Cariocas, have stepped up and started cleaning up the trash.

The native California Olympia oyster used to carpet the seafloor from Baja to British Columbia. Yet pollution, overharvesting, and habitat destruction has destroyed oyster populations. Join a team of Master’s students from the Bren School at UC Santa Barbara as they explore ways to restore habitat to bring these creatures back to our waterways.

Cities of the Sea (8 min) California Natural History Group, 2018 * selections from film only *

The marine wilderness beneath the surface can be as active as a bustling city. Join the host as she explores these underwater cities and explains the science behind their success. The featured clip dives into the rich kelp forests of the southern California coast, follows a group of sea lions, and explores the harsh environment these organisms must withstand during the winter months.

With the demand for sustainable food rising, many think aquaculture may be the answer. Bernard Friedman has been pioneering shellfish farming in the California for 15 years, while Tessa Emmer, Avery Resor, and Catherine O’Hare are in the earliest stages of testing their seaweed farm. Each generation of farmers faces a unique set of challenges, yet maintains their motivation to provide sustainable food for their communities despite the obstacles.