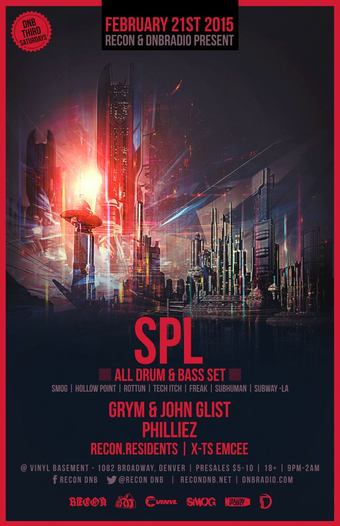 From his roots in the drum and bass movement, to the formation of his label Hollow Point Records in 2009, and now with the emergence of his trademark forward-thinking “Balearic Bass” sound, SMOG Records artist SPL stands poised to continue striking blows into the hearts and minds of electronic dance music veterans and initiates alike.Sam Pool spent his early years in Oregon, studying music theory, piano, and drums — skills he would refine during a year abroad in Amsterdam, where he studied audio engineering. His cutting-edge fusion of styles balances equal parts reverence for musical history with restlessness for innovation. Releases in the 2000s on revered D&B labels Barcode, Tech Itch, and Evol Intent set the stage for a switch in 2008 to dubstep, a move that was immediately supported by releases through industry giants Sub Human, Rottun, and Amorphous Music. No stranger to the upper echelons of the bass music universe, SPL has been remixed by some of the biggest names in the game: Bro Safari, UZ, Big Gigantic, and The Panacea. His remixes for the likes of Bassnectar, The Glitch Mob, Downlink, and Dieselboy exhibit his diverse approach in production styles and genres.Combining arpeggio-heavy 90′s era rave elements with his own brand of heavy bass music, SPL’s ‘Balearic Bass’ EP forthcoming on SMOG September 3, 2013, showcases this virtuoso producer at his best. With over 100,000 Soundcloud plays in the month of July alone on his genre-bending, dance-floor leveling track “The Future,” a BBC Radio One mix comprised of 100% original music, ThisSongIsSick.com’s premiere of his Balearic Bootleg series, and instant support on the ‘Balearic Bass’ EP from UK tastemakers Skream, Benga, and UKF, the world at large is set to discover something the underground has known all along: that SPL has been, is now, and forever shall be a leader in the world of heavy bass music.