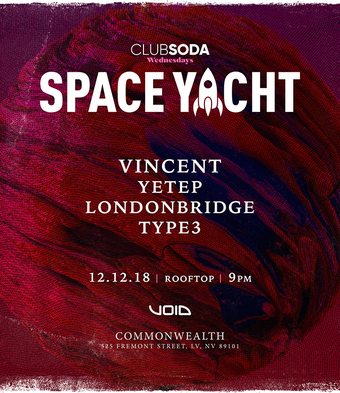 Hailing from Canada, 20-year-old Robert Hughes aka Vincent is one of the strongest forces in the world of genre-defiant, boundary-pushing electronic artists. Fusing the hottest sounds across trap music, future bass and unique styles in between, Vincent is perpetually setting the trends in his space. The producer, DJ and tastemaker broke onto the scene in early 2014 and hasn’t looked back. Vincent has recently stepped from behind his mysterious XVII moniker to reveal his true name to match the authenticity of his signature style.

Self-releasing several original and remixes with individual play counts in the millions, Vincent’s early work alone has accumulated over 7 million listens on SoundCloud. His official remix of Alison Wonderland’s “U Don’t Know” was met with critical acclaim and community support, instantly making its way into live sets from RL Grime, Flosstradamus, TWRK, Alison Wonderland herself and many more. Continuing to exceed expectations on the remix front, Vincent followed with versions of Flume’s “Some Minds,” Meek Mill & Drake’s “R.I.C.O.,” and Alessia Cara’s “Here,” a fan favorite which peaked at #1 on Hype Machine’s main chart.

Vincent’s original work continues to distinguish the producer’s appeal — burgeoning from the day one trap fans all the way up to new listeners. “Anax” became a summer anthem when dropped in May of 2015 and a follow-up was hotly anticipated. After 4 months, Vincent finally released “Only,” another anthemic trap effort that proved worth the wait — and suddenly, original material from Vincent is among the most in-demand music across dance.

Primed to take the future by storm, armed with the talent and avant-garde approach to music that fans of today and tomorrow yearn for, Vincent is reinventing the electronic artist.