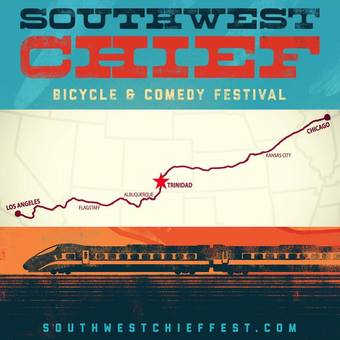 OK
Come by train! Come by car! Fly into Denver and shuttle down with some of your best comedy amigos! It's the Southwest Chief Bicycle & Comedy Festival happening in bars, venues and community spaces throughout Trinidad, Colorado Thursday May 2 - Sunday May 5 2019! Just a few hours drive from the major cities of Colorado and New Mexico, and along the Southwest Chief Amtrak train line connecting Chicago to Los Angeles, don't miss your chance to be a part of this one-of-a-kind destination festival!

Known as La Puerta De Colorado, Trinidad, CO is an emerging mountain town steeped in natural and architectural beauty. A traditional stop along the Santa Fe Trail, the once booming coal city has a long and colorful history. These features alone make it an ideal local to host modern day festival crowds, but what makes Trinidad so unique is it's position along Amtrak's Southwest Chief Passenger line and Interstate 25. A one-of-a-kind crossroads; sitting both halfway between the legendary comedy and improv city of Chicago, Illinois and the global film and entertainment mecca of Los Angeles, California and only a few hours drive south of the top mid-sized comedy city in the county, Denver, Colorado and a few hours north of New Mexico's thriving film and art community. There is no other place quite like it.

This festival offers a fun and unique travel excursion for comedy enthusiasts of all ages while offering development opportunities for Trinidad and Southern Colorado.
Festival

Trains, bicycles and lots of laughs! Join us in Trinidad, Colorado for a weekend of comedy madness! We're bringing dozens of comedians to the Colorado and New Mexico border. Bring your own bike, and we'll provide the laughs!