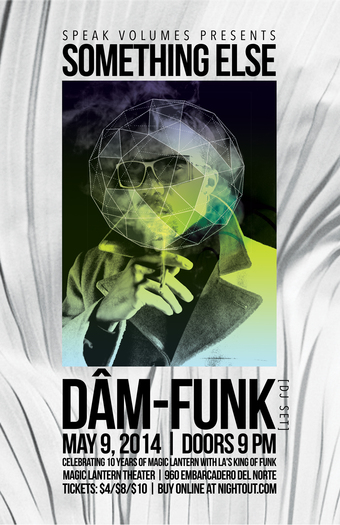 General Terms
This event is presented by Speak Volumes Media in association with Magic Lantern Films.

Something Else™ = something unlike the rest (i.e. outside of the ❒)

Speak Volumes Media and Magic Lantern films have teamed to present a new event series called "Something Else."

Taking place on Fridays throughout the spring, "Something Else" is a party night focused on bringing something fringe and something freaky to our little beachfront paradise. On May 9th, the series continues with LA-based icon Dam-Funk.

Whether through his signature series of Funkmosphere parties in LA, his association with the revered label Stones Throw Records, or his collaborations with artists like Animal Collective and Ariel Pink, the man known as the "Los Angeles ambassador of boogie funk" has been rocking dancefloors and bedrooms for more than a decade. Just last year, Dam (born Damon G. Riddick) released a collaborative album with none other than Snoop Dog under the moniker 7 Days Of Funk. This is an international, jetsetting, homegrown, hybrid-styled talent we're talking about -- bringing funk to Isla Vista in celebration of 10 YEARS of Magic Lantern events.

Ticket prices will increase on Monday (5/5), but you can snag earlybird pre-sales for only $4 through the weekend. Tickets will be $10 at the door.

As always, dress for the occasion.