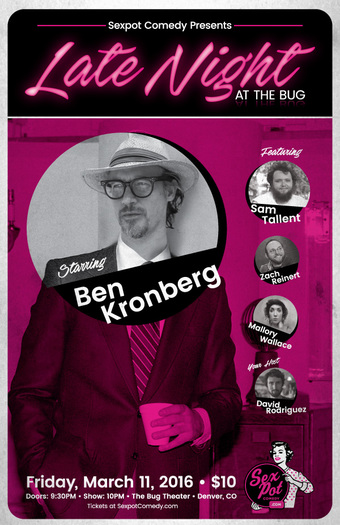 OK
Sexpot Comedy presents Late Night at the Bug is a rowdy and raucous comedy show featuring national talent and some of Denver's best comics telling jokes you won't hear on radio or TV.
Our March 11th is headliner is Ben Kronberg! Ben combines clever one-liners and witty observations with catchy songs that he performs while playing instruments like the guitar, casio-keyboard and iPhone.
Since his breakout performance at the 2007 HBO Aspen Comedy Festival, Ben has performed onJimmy Kimmel Live, John Oliver's New York Stand-up Show, Last Call with Carson Daly and most recently his own Half Hour Special on Comedy Central. Ben is also the star of the popular web series: “Ted & Gracie,” about a woman who is engaged to a serial killer and has no idea.
Hosted by David Rodriguez, on March 11th you'll also see comedy from Sam Tallent (The Fine Gentleman's Club), Zach Reinert (The Nerd Roast), and Mallory Wallace (Comedy at The Boot)!
Food & Drink Comedy