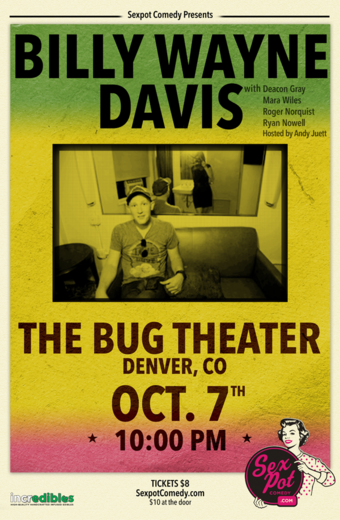 Billy Wayne DavisDeacon GrayMara WilesRoger NorquistRyan NowellHosted by Andy JuettOriginally from Crossville, TN, Billy Wayne Davis is a stand-up & writer who has performed in 41 states, 4 countries and Texas. He has appeared on NBC's Last Comic Standing, WTF with Marc Maron, hosted a Morgan Spurlock produced feature-length documentary for CMT, named a 2015 Fresh Face of Comedy by the Just for Laughs Festival in Montreal, and just finished opening for country artist Sturgill Simpson’s Living the Dream Tour.Deacon has become a Comedy Works favorite having opened for the likes of Dave Chappelle, Drew Carey, and Chris Rock. Being raised by a preacher, Deacon has a fun and unique take on being the only comic in his family. A 27-year comedy veteran, Deacon performed at the Aspen Comedy Festival, and was the winner of the inaugural Great American Comedy Festival, held at the Johnny Carson Theater. Deacon released his first comedy album, "Revival (of the Fittest)" in 2011 and has been named “Best Comedy Guru” by the Westword.

Mara Wiles was born in Maryland, or as she likes to call it, Maraland. That's where she developed her self-proclaimed East Coast edge. Her family moved to Colorado when she was in 3rd grade and she's been here ever since. While she’s based out of Denver, she has been spreading her special kind of charm telling jokes all over North America and LOVING IT! Mara performs regularly at the famous Comedy Works Denver and has trained with the Impulse Theater improv troupe. Mara won best comic at the 2011 Laugh Tracks Comedy Festival and was named one of 2014's 100 Colorado Creative by Westword. Mara produces and hosts a variety of shows including “Buddy Buddy” (sketch), “Sex and the Witty” (comedian commentary over old episodes of Sex and the City), and “Mara Wiles and the Funky Brunch,” which will make its official festival debut at High Plains this year! When she isn’t telling jokes she is usually pretending to get into yoga, walking dogs or reading Real Simple.

Roger Norquist is a human/male bard. His skills include joke-slinging, folk-singing, and rhyming. One time he knitted a hat he never wore. Career-wise, he was a finalist in the Comedy Works New Faces Contest and has performed with Reggie Watts, TJ Miller, and Baron Vaughn. He currently hosts a paranormal podcast, Werewolf Radar, and a video game web-series at SexpotComedy.com and YouTube, Jay and Roger Play Video Games. He wants you to know Han shot first.

Ryan Nowell has been a part of the Fort Collins comedy scene for two years. In that time he has won several local contests, hosted a popular open mic, hosted and developed film content for the Theatre of Cruelty Comedy Showcase, appeared on local television, and has played shows all over Colorado, from theaters to county fairs, private parties to comedy clubs.

Andy is an actor, stand-up comedian, writer, producer, host and comedy event director in Denver, Colorado. As one of Denver comedy's most omnipresent and influential forces, Andy has been behind the scenes of innumerable shows, videos and projects, when not taking center stage—or screen—with his own acting and stand-up. With appearances in the comedy web-series The Grawlix and contributions to Denver’s comedy scene too numerous to list, Andy's shadow looms large over the humor landscape. He co-founded, with Adam Cayton-Holland, the explosively popular High Plains Comedy Festival (ostensibly "Denver’s comedy festival"); produced one of Amazon Studios eight original pilots, Those Who Can’t alongside directors the Nix Bros and The Grawlix; produced T.J. Miller’s music video love letter to his hometown, Denver which premiered at Red Rocks; and has produced and performed in a slew of Denver shows including the former Grapes of Rad at Denver’s Gothic Theater.