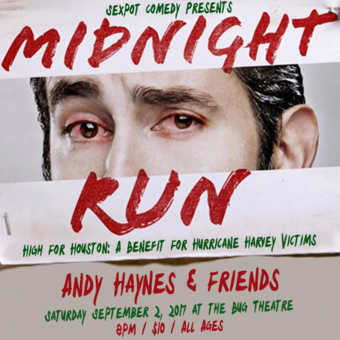 Houston needs your help!  Come support our friends in the Lone Star State with your laughter!  This Saturday night Andy Haynes is in Denver and we're throwing a Midnight Run at the Bug Theatre with all proceeds going to Houston flood victims!

Andy Haynes is a comedian from Seattle, WA, now living in New York City.  One part camp counselor, one part debate team captain, Andy Haynes aims to entertain audiences while also provoking them. A liberal that hates political correctness, a vegan that loves Big Buck Hunter, he is quickly becoming a must see performer in New York City and beyond. He's appeared at the Sasquatch Music Festival, Bridgetown Comedy Festival, NBC's "Last Comic Standing" and "Late Night with Jimmy Fallon."

Show starts at 8pm at the Bug Theatre!  $10 Tickets at the door.  All proceeds will be sent to Houston!