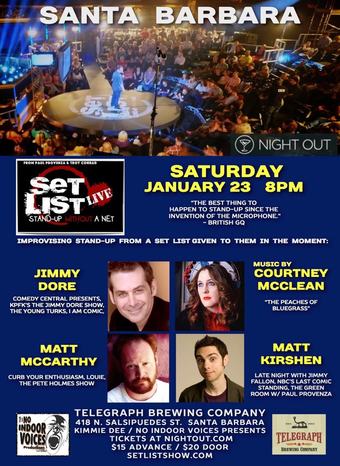 418 N Salsipuedes Sreet, Santa Barbara, CA 93101
facebook twitter email
Set List: Stand-Up Without A Net live at Telegraph Brewing Company on Saturday, January 23rd at 8pm.
The hit improvised stand-up show returns to Telegraph! Kimmie Dee/No Indoor Voices brings Los Angeles' top comedians to perform monthly on Set List in Santa Barbara at Telegraph Brewing Company.
TRAILER FOR UK TV SERIES HERE
Set List: Top comedians are given outrageous, never-before-seen topics in the moment, and perform as if it was the material they meant to do. Both the comic and the audience see the topics for the first time on the onstage screen and thus begins the most exciting, edge-of-your seat stand-up show in existence.
Set List: Stand-Up Without A Net is a Sky Atlantic TV series in the UK and Australia, and tours festivals worldwide, including Edinburgh, Melbourne, New York, Montreal, Austria, and Ireland.
The show has run in eight countries worldwide.
Set List is also a 60-episode web series on the Nerdist Channel on YouTube.
Website:  www.setlistshow.com
On Twitter: @SETLISTSHOW

COURTNEY McCLEAN (The Peaches of Bluegrass)

"It is completely urgent and pertinent that any comedy geek see this wonderful cluster-fuck of comedy brilliance."

“The most exciting thing to happen in stand-up since the invention of the microphone.”

ADVANCED TICKET HOLDERS ONLY will enjoy the SET LIST HAPPY HOUR: 21 oz. mugs for the price of a pint- from 6:00 - 7:00 PM ONLY @ Telegraph Brewing Company the evening of the show.

THE ONLINE BOX OFFICE WILL CLOSE 5:30 PM DAY OF EVENT. THERE WILL BE A LIMITED NUMBER OF TICKETS AVAILABLE AT THE DOOR $20 CASH ONLY-FIRST COME, FIRST SERVE.
Nightlife Comedy Live Music