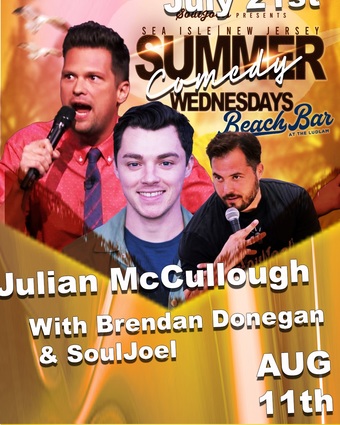 Beach Bar at The Ludlam

Summer Comedy Wednesdays at Beach Bar at The Ludlam

Julian McCullough has appeared as a guest comic on several television shows, including Comedy Central Presents, Late Night with Jimmy Fallon, Funny as Hell, Larry King Now, Conan, All Growz Up with Melinda Hill, the NPR series This American Life, and the MTV series Money From Strangers. Julian has been a contributor to the MTV2 program Guy Code, a frequent round table guest on the E! series Chelsea Lately, and was the sidekick to Whitney Cummings on the talk show Love You, Mean It with Whitney Cummings. McCullough has also hosted three specials on VH1 and has hosted the series Very Funny News on TBS alongside Rachel Perry
Comedy Nightlife Food & Drink