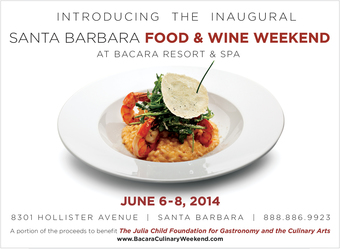 This is a complimentary session but space is limited. Please reserve your tickets online.

About our panel of experts:

Krista Harris is a fifth generation Californian who was born and raised in San Diego. She moved to Santa Barbara to attend UC Santa Barbara, fell in love with area and has lived here ever since. Her first job was working for a local newspaper and since then she has worked as an editor, graphic designer and creative director in the corporate world. But local food has been her passion since she first started shopping at farmers markets in the mid 1980s. In 2009 she started Edible Santa Barbara, a food magazine devoted to local, seasonal and sustainable food.

The magazine is independently owned and operated and also a member of Edible Communities, with over 80 member publications and a shared mission to connect consumers to the farmers, chefs and food artisans in our communities. Edible Santa Barbara has been awarded the 2011 Publication of the Year Award from the James Beard Foundation, along with the other titles currently publishing within the Edible Communities network.

Krista holds a B.A. in Film Studies from UC Santa Barbara. Krista is active in the community, is a board member at Fairview Gardens, and serves on the Partnership Council of the Community Environmental Council. And she can still be seen shopping regularly at the farmers markets with Steve Brown, her husband and co-publisher of Edible Santa Barbara.

Mary Harris, Executive Director of Visit the Santa Ynez Valley, is a tourism promotion professional who has the pleasure of living and working in a year round food and wine paradise.  She had her first French food epiphany in exactly the same city as Julia Child, Rouen, France, where she spent her college junior year abroad.  She later returned to Talloires, France for nine years to direct the Tufts European Center in a renovated 11th century Priory.  Continuing in the footsteps of Julia Child, her professional career as a university administrator and major gifts fundraiser were spent in the Boston area, where she lived with her two sons until the pull of California sunshine became irresistible.  Once again, Julia as her compass brought her to Santa Barbara county, where she has lived since 2007.   Here she has worked with the vintners, hoteliers and restauranteurs of the Santa Ynez Valley to promote its very unique qualities.  She initiated the first Restaurant Week in Santa Barbara County, and has collaborated on numerous restaurant openings, festivals and other opportunities to promote the valley to visitors from near and far.

Matt Kettmann is the senior editor of The Santa Barbara Independent, where he's worked in various editorial capacities since graduating from UCSB in 1999. Among other highlights, his work developing Independent.com into a daily news operation won the award for best weekly newspaper website in North America in both 2008 and 2013. He's also written on various topics, including wine and food, for the New York Times, Time Magazine, Wine Spectator, Smithsonian, Sunset, and other publications, and has traveled he globe extensively in pursuit of a good story. He cofounded New Noise Santa Barbara, an annual music conference and festival, in 2009, and serves on the board of Notes for Notes, a Santa Barbara-based nonprofit bringing music recording to the lives of young people in multiple American cities.

For more of his work, you can also see MattKettmann.com.

Expanded four-day event inspired by the legacy of Julia Child (Santa Barbara’s most beloved epicurean) returns to Bacara Resort & Spa. In partnership with The Julia Child Foundation for Gastronomy and the Culinary Arts, Bacara Resort & Spa is pleased to announce the 2nd Annual Santa Barbara Food & Wine Weekend over April 16-19, 2015. Set within the luxurious surroundings of Bacara, the expanded four-day event will once again showcase the distinct tastes, sights and sounds of Santa Barbara while drawing culinary talent from across the country.