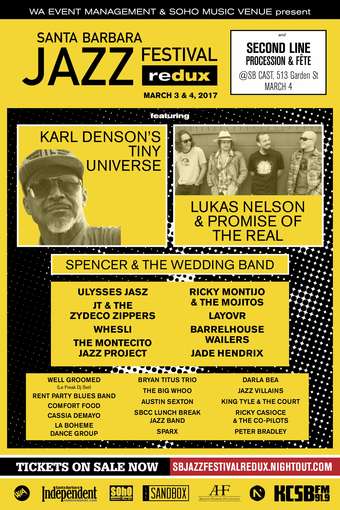 General Terms
All event venues are capacity permitting per the capacity restrictions set by the City of Santa Barbara.
Refund Policy
Passes and individual show tickets are non-refundable. No exceptions.
Cancellation Policy
If event is cancelled attendees will be given the option of a full refund or passes for a rescheduled date..
Transfer Policy
Passes and individual show tickets are not transferable. No exceptions.
Age Restrictions
Purchaser should check each venue policy for age restrictions. Most events are 21+.
Miscellaneous Restrictions
Soho music showcases sold separately from the Two Day Grand Pass.

What is Santa Barbara Jazz Festival Redux all about? WA Event Management is reintroducing SBJF to the community as part of our mission to create community building events and to continue supporting the live music scene in Santa Barbara. 2 Day's. 30 bands. 8 venues. With a small splash of New Orleans!

When & Where is Santa Barbara Jazz Festival?

SBJF Redux is set for March 3 - 4, 2017 in sunny Santa Barbara, CA. This two day inclusive and inspired event will take place in multiple and unique venues, with Downtown Santa Barbara, The Funk Zone, and The Lagoon District serving as the festival backdrop. Venue locations include:

What will be offered at Santa Barbara Jazz Festival?

Besides a superb lineup of music SBJF Redux will also include a Second Line Procession & Fête event with a full lineup of music hosted at SB Cast on Saturday, March 4th from 11:00am - 6:30pm, a FREE Youth Jazz Showcase at Paseo Nuevo Mall, Opening Night Documentary Screening of "One Note at a Time", Busker Session's throughout Santa Barbara, and more!

**Tix to the Karl Denson's Tiny Universe show can be purchased here:
nightout.com/events/karl-densons-tiny-universe-santa-barbara-ca

**Tix to Lukas Nelson & Promise of the Real show can be purchased here:

No Refunds or Exchanges

Venue showcase locations and set times are subject to change

Entry to all venues are capacity permitting

All events are rain or shine