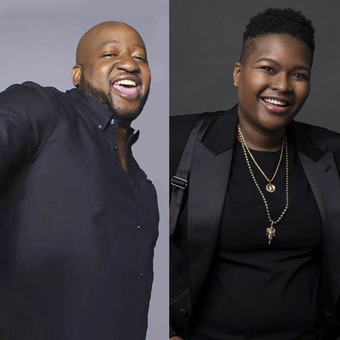 Sam Jay & Sherrod Small at SoulJoel's Heated Tent
We will have a tent with socially distanced pods and space heaters.

In 2018 she made her Netflix debut  on “The Comedy Lineup” and released her Debut Album “Donna’s Daughter.”  She wrote for the “2018 MTV Movie & TV Awards” and has a recurring role on TV Land’s “Nobodies”.

In 2017, Sam was a standout of the “Just For Laughs: New Faces.”   She was the host of “Ricking Morty”, the Rick and Morty post-show on Adult Swim and  she was a cast member of MTV’s “SafeWord.”  Sam made her late night television debut on ABC’s Late Night with Jimmy Kimmel and her half-hour stand-up special premiered on Comedy Central.

Her credits also include a part in the award-winning film “Pinsky”, Starz’ “Take My Wife”, Comedy Central’s “White Flight”, “The Meltdown with Jonah and Kumail”,  as well as Viceland’s “Party Legends” & “Flophouse.”


About Sherrod:
Sherrod has appeared in numerous popular series and is one of the most recognizable talking heads in America. You've seen him all over VH1's "Best Week Ever" & "I Love..." Series, guest hosting on ABC's "Good Morning America" & NBC's "TODAY", & as a frequent guest on FOX's "Red Eye" as well as Travel Channel's "Men VS Food' & "Street Cred". Most recently Sherrod starred in A&E's "Black & White" which he produced & created with fellow comedian Christian Finnegan as well as wrote & starred in 'Malcom' in Tyler Perry's "Are We There Yet?" Sherrod has also performed on "Jimmy Kimmel Live" Comedy Central, "Premuim Blend" and NBC's "Showtime at The Apollo," wrote & performed on Comedy Central's "Tough Crowd with Colin Quinn" and was featured in Jerry Seinfield's film "Comedian."

Sherrod is also one of the most popular radio voices today. You can currently listen to Sherrod weekly on his acclaimed "Racewars" podcast co-starring Kurt Metzger, or as a regular guest on SiriusXM's "Opie Show." He has also appeared as a guest on "Raw Dog," "Scott & Sid Morning Show," "Legion of Skanks" & more.

You can see Sherrod currenlty touring the country with 'The Comedians of Opie Radio' & 'Radio Wars LIVE' as well as on this year's 'Just for Laughs' Comedy Festival in Montreal.
Food & Drink Nightlife Comedy