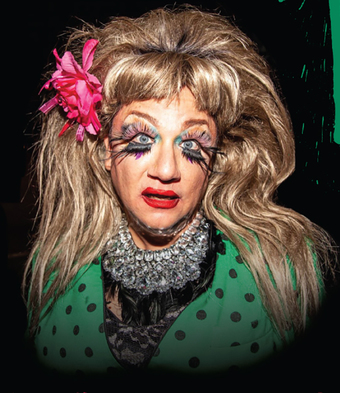 This October, Tamale Ringwald is packing her bags and moving to Puerto Vallarta! But don’t worry, you’ve still got a chance to tell her exactly how you feel about her.

Join us Sunday, September 8 for rooftop chilling, dance jams, drag performances and a light roasting to help send Tamale Ringwald off with style!

If you’ve lived in San Francisco over the last fifteen years, its likely you’ve hung out with Tamale Ringwald, aka Danyol Leon. This October, Danyol and his husband Bill Baker will relocate to Puerto Vallarta, MX.

Danyol / Tamale has left a mark on the city by the Bay. As a painter, Danyol has had dozens of exhibitions and installations throughout San Francisco. As a musician, he has been a bright light in queer punk and electronic performance circles with Muñecas, Adonisaurus and other projects. As the drag queen Mx. Tamale Ringwald, she has wowed (and disappointed) crowds at SQURRRL, Lilith Bear, Mother, The Monster Show, and the public toilet on Castro & Market.

Danyol usually has a smile to spare, a joint to share, and a terrible pun to barf out inappropriately. He models a true humanist’s heart, and has shown us kindness and love we take into every moment of our lives. And for that he must burn, OR AT LEAST feel the heat.