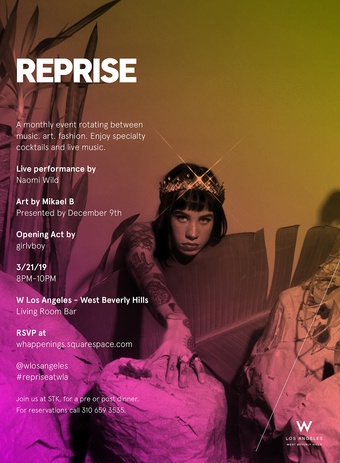 PLUS: Opening act girlvboy and art by Mikael B (presented by December 9th).

After writing and featuring on "Higher Ground" for ODESZA, Naomi spent most of 2018 on the road with them performing in front of 10K+ people a night. Naomi is taking advantage of all that attention to start releasing her own artist project she's been quietly assembling.

Her 2018 debut "Howlin" came out last year and premiered on New Music Friday weeks before her appearance with Odesza during their headlining Coachella set and Conan appearance. Kicking off the new year with her SXSW solo debut this coming March, Naomi has big plans to release more music in 2019.

girlvboy (girl vs boy), aka gvb, is a production duo making electronic pop. Based in LA, Una Eggerts is originally from Iceland and Martyn Zub hails from Australia.

Una and Martyn met at a film premiere late in 2017, sparked an immediate friendship and the next day they started sending loops, beats and lyrics back and forth ... girlvboy was born.

They recently landed a song in a film, Velvet Buzzsaw (Netflix), starring Jake Gyllenhaal, Toni Collette and John Malkovich. It premiered at the Sundance Film Festival this January.

Outside of music they both work in the entertainment industry, Una fresh from Las Vegas where she originated the role of Jayne Mansfield in "Marilyn The Musical," and Martyn recently completed Deadpool 2 at Fox Studios as a Sound Engineer and Re-Recording Mixer, and is currently working on John Wick 3 as a sound designer.

girlvboy are currently refining, writing, and updating mixes and look forward to releasing their tracks this year.

Influenced by his early years as a graffiti artist and working within the urban contemporary genre, Mikael B has developed a signature artistic identity and characteristic expression. By combining the graphic footprint of wildstyle graffiti -- a complex and intricate genre in which forms, words, and letters are woven together with bold colors and graphic shapes -- he creates a dynamic universe that are akin to musical visualization.

The artist's sense of colors and their effects play a significant role in each piece, bursting with complimentary colors to further fuel a near overwhelming visual appreciation of his work. These expressive pieces have a volcanic energy, uncompromising attitude, an inherent candidness which invite interpretation and appeal through their explosive colors and geometric shapes. It is through each piece that Mikael B creates a universe where everything is possible -- a notion which goes in line with his personal way of life.