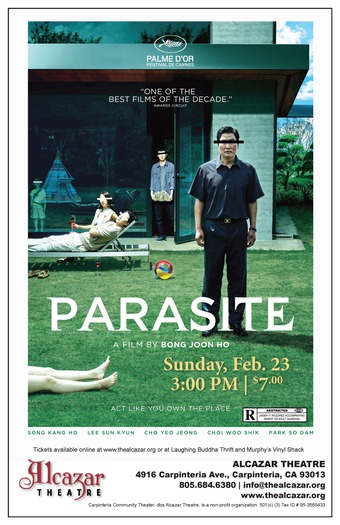 Greed and class discrimination threaten the newly formed symbiotic relationship between the wealthy Park family and the destitute Kim clan.

Jobless, penniless, and, above all, hopeless, the unmotivated patriarch, Ki-taek, and his equally unambitious family--his supportive wife, Chung-sook; his cynical twentysomething daughter, Ki-jung, and his college-age son, Ki-woo--occupy themselves by working for peanuts in their squalid basement-level apartment. Then, by sheer luck, a lucrative business proposition will pave the way for an insidiously subtle scheme, as Ki-woo summons up the courage to pose as an English tutor for the teenage daughter of the affluent Park family. Now, the stage seems set for an unceasing winner-take-all class war. How does one get rid of a parasite?