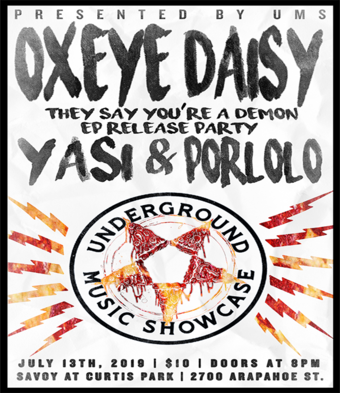 OXEYE DAISY - they say you're a demon EP release

OXEYE DAISY - they say you're a demon EP release

Denver-based dream-grunge band Oxeye Daisy have announced a new EP, They Say You’re a Demon. The four-song release will be available on all streaming services starting July 12.

In addition to the digital version, the band will have a small run of 7” vinyl, cassette tapes, and CDs. These will be available exclusively at an EP release party, taking place on July 12th at Denver’s Savoy in Curtis Park. Vinyl and cassette are limited to 25 copies. Ticket information about the event will be available on the band’s website.

Joining Oxeye Daisy for their release party will be local favorites YaSi and Porlolo.

Three of the EP’s songs were recorded and mixed in January 2019 with Colin Bricker at Denver’s beloved Mighty Fine Productions. Each track was recorded mostly live to capture the thrilling interplay the band has become known for.

The EP’s final track, “Wicked Game,” was mixed by the band and released as a single in December 2018. It has been remastered for the EP release.

The three new tracks speak to the band’s expansive palette. Lead singer / songwriter Lela Roy wrote the poppy first track, “How Do You Know,” when she was a teenager.

“We heard her noodling around on it in practice one day and were like ‘wait what is that? That sounds really good,’” says bassist Eddie Schmid. “She was like ‘oh this old thing?’ We all loved it and thought it deserved a bigger arrangement and recorded version.”

Some spooky guitar textures kick off “Beth,” the second track, a dark, danceable number that Roy wrote about a doomed mother-daughter relationship. “Girls Are The New Boys,” the other new song, captures the band’s infectiously goofy energy, with its driving surf-punk first half giving way to a hypnotic psychedelic outro, interlaced with spitfire vocals and warm synths.

The EP will arrive fresh off some major milestones for the band. On July 1, Oxeye Daisy is performing its first show at Red Rocks Amphitheater. In March, Westword announced the five-piece as the Best New Rock Band in its 2019 Best of Denver awards.

Roy says the band has been putting the finishing touches on even more new material, which will take the band further in a synth-pop direction.

Oxeye Daisy began in 2017 in Denver, built on a shared love of Kate Bush, Yo La Tengo, the Cranberries, and Bieber's early stuff. Guitarist Lela Roy's soaring voice powers the band's songs, which mine the sounds of dream-pop, 90s alternative rock, and experimental indie. Eddie Schmid (bass) and Ramel Sanchez (drums) are the band's driving backbone, Daniel DiMarchi (lead guitar/synth) adds dreamy textures, and Stephen Pamas lays down honey-sweet harmonies, guitars, and synths. After honing their sound in Colorado basements, the group went on to record their debut album. Upon its release in May 2018, it was named one of the "best Colorado albums of the year so far" by Colorado Public Radio. The band went on to perform at Denver's 2018 Underground Music Showcase, where they were called a "must-see" act by Westword and 5280 Magazine. Along the way, the band has performed live sessions on Colorado Public Radio’s OpenAir and Boulder’s Radio 1190.