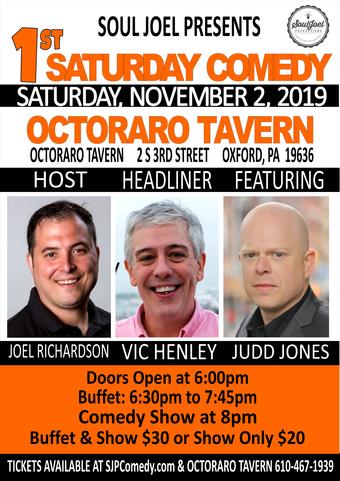 A thirty plus year true comedy veteran, Alabama born and raised Vic Henley has done it all. Co-author of a national best-selling book with fellow comedian Jeff Foxworthy, Vic has appeared on HBO, CBS, NBC, FOX, BRAVO, CMT, MTV, A&E, The History Channel and just about every other stand-up comedy show on television. He was a VH-1 VJ and has his own Comedy Central half hour special as well as performances on The Late Show and The Tonight Show.With an easy style that covers a variety of topics, Vic has been featured on nationally syndicated radio shows as well several channels on Sirius/XM satellite radio.According to the London Times, Vic has an innate ability to turn perfectly reasonable adults into guffawing idiots making him a crowd favorite all over the world. Whether it's Montreal's Just for Laughs Comedy Festival, or the granddaddy of them all, The Edinburgh Fringe Festival in Scotland, Henley continues to draw rave reviews and pack houses. His success at Edinburgh led to a slew of BBC TV appearances on stand up and talk shows, some where he was the first American to perform.Vic has also performed on over 500 college campuses in all 50 states, receiving 8 "Comedian of the Year" nominations. His popularity in the corporate, performing arts and associations markets has landed him many high profile gigs including co-hosting an event with former president George H.W. Bush. He has also been able to combine his writing and performing skills in feature films including Sacha Baron Cohen's Bruno.Vic resides in New York City and can be seen regularly on numerous stages all over town including Gotham Comedy Club, The Comedy Cellar, Comic Strip Live, New York Comedy Club and Dangerfield's.