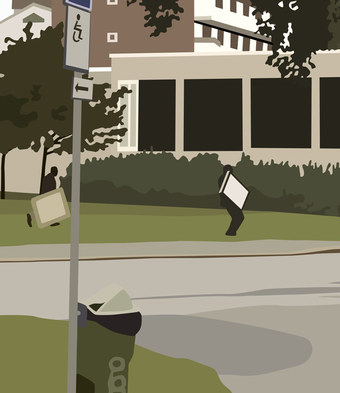 Kota Ezawa: The Crime of Art, features a series of light-boxes and video animations by San Francisco, CA-based artist Kota Ezawa chronicling some of the most infamous and high profile museum heists in history. At the heart of this exhibition is a series of images paying homage to the 13 artworks – including those by Degas, Manet, Rembrandt, and Vermeer – stolen from the Isabella Stewart Gardner Museum in 1990. Ezawa’s digital interpretations of the stolen Stewart Gardner masterpieces are presented to scale and illuminated in light-boxes that serve as modern apparitions of the centuries’ old works. These technological vestiges are at once copies of the originals, while also carrying the mark of Ezawa’s animated hand. Reduced to flat planes of color, the original paintings take on new life as Ezawa plays with ideas of appropriation and originality.

Bloom Projects: Beatriz Olabarrieta, Ask the Dust marks Beatriz Olabarrieta’s first institutional show in the United States. Olabarrieta will present a new commissioned installation revolving around a film work, exploring her ongoing interest in writing, drawing, and collaboration with other artists, musicians, and writers as devices to generate performative spaces or situations. The exhibition will be accompanied by a commissioned text by Bianca Stoppani.