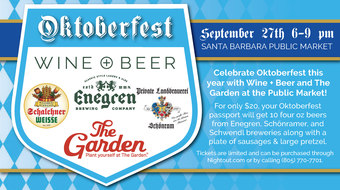 Oktoberfest at the Public Market!

Celebrate Oktoberfest this year with Wine + Beer and The Garden at the Public Market!

Oktoberfest at the Public Market!

General Terms
All items are non-refundable, all sales are final.
Age Restrictions
You must be 21 years of age or older

Oktoberfest has arrived! The Garden and Wine + Beer are co-hosting an Oktoberfest celebration inside the SB Public Market, featuring three awesome breweries: Enegren Brewing from Moorpark, as well as  Schönramer and Schwendl, traditional breweries from Bavaria, the home of Oktoberfest!

Aaron Wymore, VCSB Biermeister from Enegren and all around rad guy, will be pouring and sharing stories around the table. Also joining us is Mark Gerlach, an expert on Bavarian beers and a frequent visitor to Germany, to provide the behind the scenes scoop on these award-winning Bavarian breweries, Schoenramer and Schwendl.

Taste your way through 10 beers from these awesome breweries and also enjoy a sausage and pretzel plate. In addition, Wine + Beer will be giving 10% off all retail sales of the beers listed below. Prost!

Beers to be featured at The Garden:

Beers to be featured at Wine+Beer:

Urban contemporary beer garden inside the Public Market with 41 beers on tap and televised global sports!