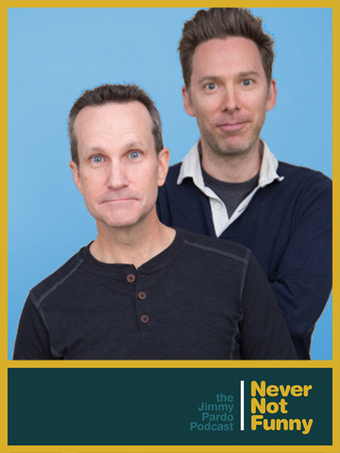 Never Not Funny Live in Denver!

Never Not Funny Live in Denver!

Never Not Funny is an award-winning weekly podcast hosted by comedian and TV personality Jimmy Pardo. Broadcasting since 2006, the show features free-form conversations between Pardo, his producer Matt Belknap and his sometimes famous, always funny friends. Now part of the Earwolf Network, the show boasts half a million downloads per month and has appeared on Entertainment Weekly's Must List, in Esquire, GQ and Billboard Magazine, and was named a top comedy podcast by iTunes, Mashable, and The AV Club.

Never Not Funny has raised over a million dollars for Smile Train with its annual “Pardcast-a-thon” charity event.

Jimmy Pardo has been seen on countless television shows, including “Conan,” “The Tonight Show,” “The Late Late Show,” “@midnight,” and most recently he hosted the critically acclaimed “Race To Escape” on Science Channel.

What they are saying about Never Not Funny:

The #1 relatively obscure thing you need to be paying attention to.

NNF is serving up the funniest podcast eps… Hilarious.

NNF is the most consistently funny podcast out there.