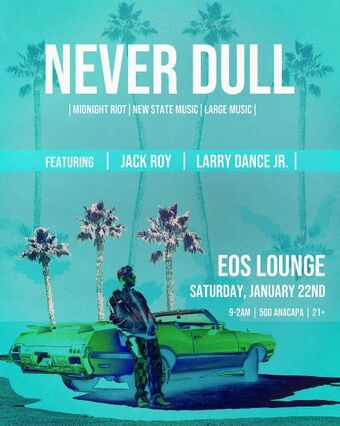 Newer to the scene but not to be underestimated, 29-year-old Los Angeles born Producer, DJ & Singer/Songwriter Alberto De Santiago (Never Dull) has been shaping his sound for several years from his adopted hometown of Tijuana, Mexico. Living in Southern California for much of his early life, it was his frequent trips back and forth across the border to attend underground parties that began to shape his sound. “Jumping between cities really shaped my vision because Tijuana is a city that leans towards Disco but San Diego and Los Angeles is where I really identified with the sounds and style of House music,” said Alberto.

A self-confessed music addict, it is the 1990/2000s golden era of House that has had the most influence on the current Never Dull sound. Coincidentally, it is the classic Chicago label Large Music that has brought Never Dull into their exclusive artist roster for a huge release in 2018. “When I hear his work, it is all there,” says Large Music owner Jeff Craven.”He has a reverence for where House has come from but also a keen sense of where our music is going.”

Locked in and ready to ride, Never Dull is well poised to lead a new generation of House lovers into the future.