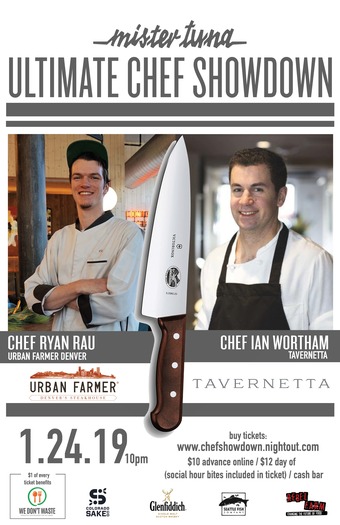 OK
Thursday, January 24th
10pm-Midnight
$10 ahead | $12 at the door
$1 from every ticket sold benefits We Don't Waste
Sponsored by Colorado Sake Company

Join us on Thursday, January 24th for the best late night event in Denver.  Chef Ryan Rou from Urban Farmer goes head to head again Chef Ian Wortham of Tavernetta.  On the menu?  Three surprise ingredients and a lot of fun.  Come early to enjoy social apps.  The competition begins at 10:30.

Ian Wortham, Chef Di Cucina Originally from New Jersey, Ian began cooking in New York State's Finger Lakes region in 2004 and cooked in several restaurants across the state while attending Ithaca College to get his degree in Photography. In 2011 he moved to Denver, attended Johnson & Wales University for Culinary School, and began working at Frasca Food & Wine as a line cook. He was promoted to Sous Chef and then to Chef de Cuisine in 2015. During the development stages of Tavernetta he had the opportunity to travel throughout Italy and cook at numerous restaurants for inspiration and research. Through his travels, he brings a deep understanding of Italian culture and cuisine to the menu of Tavernetta.
Ryan Rau, Chef de Cuisine Spending over half of his culinary career with the chef driven, seasonal steakhouse Urban Farmer, it’s safe to say, Urban Farmer Denver’s Chef de Cuisine, Ryan Rau is full of passion and valuable experience. At 21-years-old, after studying Broadcast Journalism at a community college, the Portland, Oregon native decided to instead pursue his love for cooking and moved to Bridge Point, California where he was launched into the world of restaurants working in both the front and back of house at a local dude ranch. After developing an arsenal of culinary skills, Ryan was offered the opportunity to move back to his home town of Portland and work with the culinary school, Le Cordon Bleu. After just two short months, Ryan was recruited by then Executive Sous Chef, Chris Starkus to work with the Urban Farmer Portland team. Discovering a love for in-house butchery, a farm-to-table focus and sustainable practices, the restaurant soon became home. When Chef Chris Starkus was brought on as Executive Chef of the new Urban Farmer Denver location, Ryan was brought over as a Sous Chef, and after continuing to be an invaluable part of the super-star chef team was promoted to Chef de Cuisine in 2018.