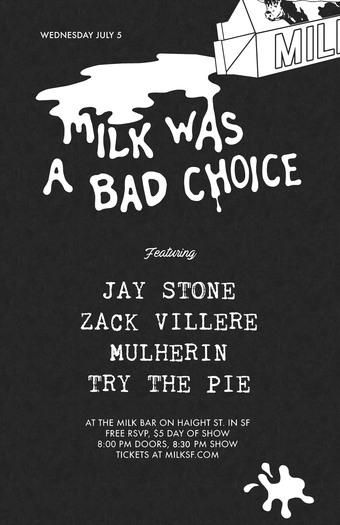 OK
Milk Was A Bad Choice featuring Jay Stone, Zack Villere, Mulherin, & Try the Pie
Doors 8 PM, Show 8:30 PM
FREE w/ RSVP, $5 Day of Show // 21+
Milk Was A Bad Choice has got you covered on some amazing sounds this July. Join us on Haight Street for a free night of live music with four dope artists from the Bay and beyond!
Jay Stone
Jay Stone is a lyricist that can kidnap the crowd and never give it back! His intricate wordplay partnered with multi-layered storytelling ability gives his music allure and substance. The fast-paced delivery and metaphoric approach in his lyrics produce intriguing and high energy live performances.
Zack Villere (L.A.)
Taking cues and influence from 2000s era pop and hip by the likes of Pharrell and JT, Zack (fka fro yo ma) makes mezmorizing lo-fi R&B songs akin to contemporaries such as Steve Lacy and Nick Hakim. Little World, his debut project under his given name, is coming in June and has already garnered some attention following the beautiful singles "Cool" and "Next".
Mulherin (L.A.)
Nashville-born, Los Angeles-based twin crooners Parker and Marshall Mulherin are students of R&B music. Whether it be the classic 90s soul of D'Angleo and Musiq Soulchild, or more current artists like Frank Ocean and Drake, Mulherin have combed over every line. Together they deliver trap-infused R&B filled with chilling harmonies only two identical twins could cook up.
Try The Pie
Bean Tupou's Try the Pie is a solo effort spanning the length of almost ten years. Drawing upon a Tongan-American and a Bay Area punk background, Bean pieces together ideas of impromptu harmony, poetic imagery, soft guitar melodies, dissonance and noise. These elements are used to create a sonic collage-work to provide a variety of vivid storytelling. The project is based heavily in the ideas of mixing present experiences with indigenous folk art, inherited histories and oral storytelling of a poetic nature.
Live Music Concert Nightlife