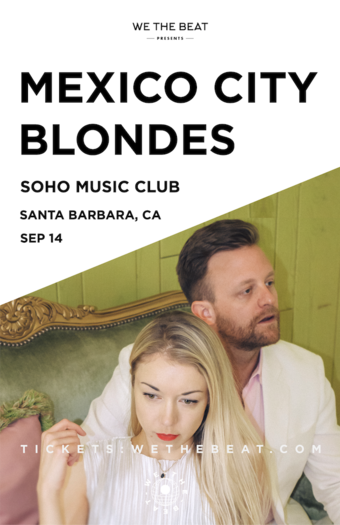 Mexico City Blondes is Allie Thompson and Greg Doscher. The pair met in Santa Barbara, California after Allie replied to a Craigslist posting that Greg had put up seeking a collaborator. Originally from Washington, Allie had recently moved back into town. Feeling frustrated that she was being kept from writing and performing with her boyfriend’s band, she decided to try and find another outlet for her creativity. Realizing that they had many similar influences, they got off to an inspired start. The first single released, “Fade”, directly addressed Allie’s situation and was a good vehicle for Greg’s new production approach. Seeking to move beyond the guitar rock of his previous band, he began experimenting with different textures and styles; employing dusty drums, heavy low end and minimal instrumentation on “Fade.” Taken by surprise at the sudden success of the track on the blogosphere after Hillydilly featured it, the pair continued to collaborate on a series of well received follow up singles (“Colors”, “Watery Dreams”). They followed with a self-released, self-titled EP of six songs and a run of shows on the West Coast to promote it.
Taking some time to regroup, Allie and Greg decided to continue to work on their own terms. Building out a new studio, they sought to put together a well formed and cohesive full length, as opposed to periodically dripping out singles. For the better part of 3 years, they worked on every aspect of the record themselves and are thrilled to release “Blush” through Burger Records, having long admired the roster and DIY ethos of the label.
Live Music Nightlife Concert
View nearby accommodations